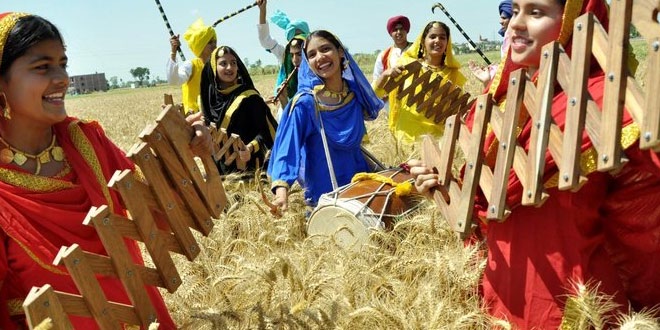 Where is Baisakhi Celebrated? Throughout the state of Punjab and Haryana, particularly in Amritsar.

Baisakhi is a harvest festival, a Punjabi new year festival, and commemoration of the founding of the Khalsa (Sikh religion brotherhood) all rolled into one occasion.

In 1699, Guru Gobind Singh (the 10th Sikh Guru) decided to discontinue the tradition of Gurus in Sikhism. He proclaimed the Granth Sahib (holy scripture) to be the eternal Sikh Guru. He then formed the order of the Khalsa by selecting five fearless leaders of his followers, who were prepared to lay down their lives to save others.

Baisakhi, also known as Vaisakhi marks the Sikh New Year and is a spring harvest festival celebrated in Punjab and other parts of North India.

Baisakhi, also known as Vaisakhi marks the Sikh New Year and is a spring harvest festival celebrated in Punjab and other parts of North India. Baisakhi falls on 13 April this year and it commemorates the formation of the Khalsa Panth, under the leadership of Guru Gobind Singh Ji in the year 1699. Hindus celebrate the descent of Goddess Ganga on Earth on this day. In her honour, devotees gather for a holy dip along the banks of the river Ganga. In Punjab, Baisakhi marks the harvest of the rabi crops and farmers pay their tribute by thanking God for an abundant harvest, which is a symbol of prosperity.

On Baisakhi, the Khalsa Sikh order was founded after which the Guru Teg Bahadur was persecuted and beheaded by Mughal emperor Aurangzeb when he refused to be converted to Islam. Following these events, in the year 1699, the tenth Sikh Guru, Guru Gobind Singh Ji laid the foundation of Panth Khalsa, by baptizing Sikh warriors to defend religious freedom.

This festival is celebrated across Punjab and parts of North India. A number of processions called Nagar Kirtan led by five Khalsas, dressed as Panj Pyaare passes across the streets in the wee hours of the morning. Devotees visit Gurudwaras to offer special prayers and a number of fairs are organised where festivities are observed with Bhangra and Gidda performances, folk songs, amusement rides and good food.