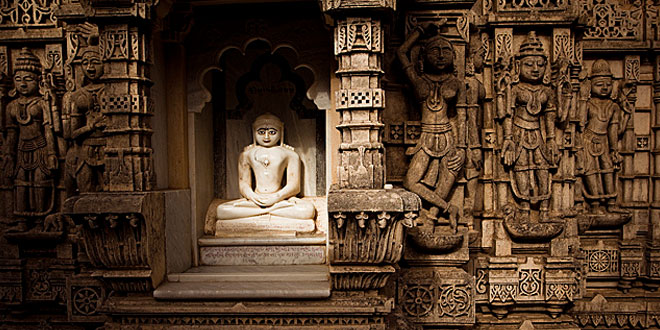 Lord Mahavir was the twenty-fourth and the last Tirthankara of the Jain religion. According to Jain philosophy, all Tirthankaras were born as human beings but they have attained a state of perfection or enlightenment through meditation and self realization. They are the Gods of Jains. Tirthankaras are also known as Arihants or Jinas.

Mahavir was born in 599 B.C. as a prince in Bihar, India. At the age of 30, he left his family and royal household, gave up his worldly possessions, including clothing and become a monk.

He spent the next twelve years in deep silence and meditation to conquer his desires and feelings. He went without food for long periods. He carefully avoided harming or annoying other living beings including animals, birds, and plants. His ways of meditation, days of austerities, and mode of behavior furnish a beautiful example for monks and nuns in religious life. His spiritual pursuit lasted for twelve years. At the end he realized perfect perception, knowledge, power, and bliss. This realization is known as kevaljnana.

He spent the next thirty years traveling on bare feet around India preaching to the people the eternal truth he realized. He attracted people from all walks of life, rich and poor, kings and commoners, men and women, princes and priests, touchable and untouchables.

He organized his followers, into a four fold order, namely monk (Sadhu), nun (Sadhvi), layman (Shravak), and laywoman (Shravika). Later on they are known as Jains.

The ultimate objective of his teaching is how one can attain the total freedom from the cycle of birth, life, pain, misery, and death, and achieve the permanent blissful state of one’s self. This is also known as liberation, nirvana, absolute freedom, or Moksha.

He explained that from eternity, every living being (soul) is in bondage of karmic atoms, that are accumulated by its own good or bad deeds. Under the influence of karma, the soul is habituated to seek pleasures in materialistic belongings and possessions. Which are the deep rooted causes of self-centered violent thoughts, deeds, anger, hatred, greed, and such other vices. These result in accumulating more karma.

He preached that right faith (samyak-darshana), right knowledge (samyak-jnana), and right conduct (samyak-charitra) together will help attain the liberation of one’s self.

At the heart of right conduct for Jains lie the five great vows:

Jains hold these vows at the center of their lives. The monks and nuns follow these vows strictly and totally, while the common people try to follow the vows as far as their life styles will permit.

At the age of 72 (527 B.C.), Lord Mahavir died and his purified soul left the body and achieved complete liberation. He became a Siddha, a pure consciousness, a liberated soul, living for ever in a state of complete bliss. On the night of his salvation, people celebrated the Festival of Lights (Dipavali) in his honor.