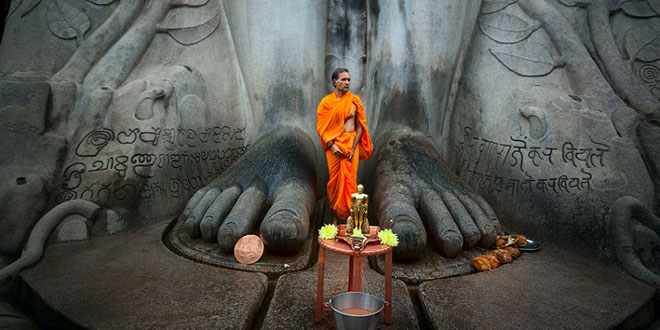 Mahavira is regarded as the man who gave Jainism its present-day form; although this is true only in the widest sense. He is sometimes wrongly called “the founder of Jainism“.

Mahavira is only this world’s most recent tirthankara (and will be the last one in this age). It may be more useful to think of him as a reformer and popularizer of an ancient way of life rather than as the founder of a faith.

Mahavira was originally born as Vardhamana in north east India in 599 BCE (that’s the traditional date but some modern scholars prefer 540 BCE, or even later).

He was a prince, the son of King Siddhartha and Queen Trishala, who were members of the kshatriya (warrior) caste and followers of the teachings of Parshva.

When Prince Vardhamana reached thirty years of age, not long after the death of both his parents, he left the royal palace to live the life of an ascetic, or a sadhana (one who renounces all worldly pleasures and comforts).

He spent twelve and a half years subjecting himself to extremely long, arduous periods of fasting and meditation.

Eventually his efforts bore fruit, and Vardhamana attained Kevalgyan, enlightenment, and therefore was later called Mahavira (the name is from maha = great, and vira = hero).

Why Jainism Is The World’s Most Peaceful Religion

From that day forward Mahavira taught the path he had discovered to other seekers. His teaching career lasted until his physical death in 527 BCE (according to Svetambara texts), when he was 72 years old. After a final period of intensive fasting he attained moksha, the final liberation from all rebirth.

Mahavira added the principle of chastity to the four Jain principles already given by Parshva (no violence, no lying, no stealing, no possessions).

According to tradition Mahavira is said to have established a community of 14,000 monks and 36,000 nuns before he died.

But he certainly did create a large and loyal monastic / ascetic / mendicant community inspired by his teaching. One of his immediate disciples, Jambu, was the last person in this age to achieve enlightenment.

Over the next centuries the Jain community grew and spread to central and western parts of India.

Jainism began to lose strength as Hinduism grew in the early part of the last millennium, and by the middle of the 19th century it was seriously weakened.

Jainism was revived in the 19th century by a number of Svetambara reformers, most notably Atmaramji (1837-96). In the 20th century the Digambara movement was revitalized through the work of Acharya Shantisagar.

Previous Legends of Mahavira Jayanti
Next Who was Lord Mahavir?