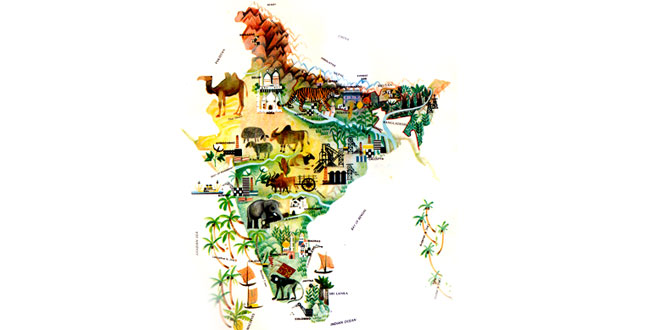 System of government: Federal republic
Capital: Delhi
Location: On the Indian subcontinent, between the Himalayas in the north and the Indian Ocean in the south. India has borders with Pakistan in the West, China, Nepal and Bhutan in the north, and Bangladesh and Burma in the east. India also includes the Andaman and Nicobar Islands in the Bay of Bengal, and the Laccadive (Lakshadweep) Islands in the Arabian Sea
Area: 3,287,590 sq km
National composition: Extremely diverse; the population of northern and central India consist largely of peoples who speak Indo-European languages (Hindi, Bengali, Punjabi, Bihari, Rajasthani, Marathi, Gujarati and so on; the people of southern India speak such Dravidian languages as Kannada, Tamil and Telugu)
Religions: Hinduism, Islam, also Christians, Sikhs, Buddhists, Jains
Official languages: Hindi and English; the Constitution also recognizes 14 other major regional languages used officially in the states; altogether some 900 languages and dialects are spoken in India
Currency: Indian rupee = 100 paise
Administrative divisions: 29 states and 7 union territories
Other major cities: Kolkata, Mumbai, Chennai, Hyderabad, Bengaluru, Ahmedabad
Highest elevation: Kanchenjunga (8,598 m) in the Himalayas on the Nepal border; Nanda Devi (7,816 m) in the Himalayas
Chief rivers: Ganges, Brahmaputra, Mahanadi, Godavari, Krishna
Climate: The north includes some of the rainiest parts of the world; the rest of the country has three main seasons: a cool, dry winter, a hot season (March – June), and a rainy monsoon season (June – September). Temperatures are high for most of the year except in the mountainous north

North India is mountainous and includes parts of the Himalayan and Karakoram ranges. From the mountains flow many rivers, including the Ganges and Brahmaputra, which water the vast Northern Plain. This, the world’s largest alluvial plain, is India’s most densely populated region. The western border with Pakistan, however, passes through the desolate Thar Desert. Southern India consists largely of a plateau, called the Deccan, which is bounded by two ranges, the Western and Eastern Ghats.

Forests yielding rare woods and bamboo cover about one-fifth and farmland about one-half of the total area of India. In 1980 agriculture, forestry and fishing employed 71 percent of the work-force and accounted for about one-third of the gross domestic product. India is the world’s leading producer of tea and the second largest producer of rice and sugar cane. Other major crops include cereals, coffee, cotton, fruit, jute, spices and tobacco. Natural rubber is also produced in large quantities However, Indian farms remain largely unmechanized. Animal husbandry is less developed than crop farming. Although India has the greatest number of cattle in the world, Hinduism forbids their slaughter. Sheep and goats are bred for milk and meat. Fish are an important supplement to the diet of people in coastal areas.

In 1980 industry employed 13 percent of the work-force and accounted for one-quarter of the gross domestic product. India has deposits of all metal ores, especially iron, manganese and other non-ferrous metals. There is also coal, oil, diamonds, semi-precious stones, magnesite, mica and so on. The best developed industries are engineering, petro-chemicals, electrical engineering, electronics and the production of building materials. The just, cotton and silk industries are extremely important. Other traditional products include carpets, woodwork and jewellery. Lack of power hinders the growth of Indian industry.

Railways are the leading means of transport, followed by water ways and roads. Air transport is well developed, connecting many Indian cities, while Air India operates international services. The largest seaports are Mumbai and Chennai, while Kolkata is the main port for Indian cotton exports. The busiest airports are at Mumbai, Delhi and Kolkata.