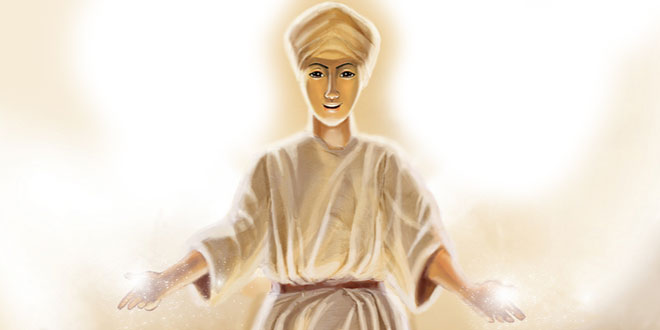 Sikhism, or known in Punjabi as Sikhi, is a monotheistic religion founded during the 15th century in the Punjab region of the Indian subcontinent, by Guru Nanak and continued to progress through the ten successive Sikh Gurus (the eleventh and last guru being the holy scripture Guru Granth Sahib. The Guru Granth Sahib is a collection of the Sikh Guru’s writings that was compiled by the 5th Sikh Guru).
Sikh Gurus
Khalsa Emblem
Sikh Temples
Design and Function
Etiquette for Visitors
Example of Sikh Temples

It is the fifth-largest organized religion in the world, with approximately 30 million adherents. Punjab, India is the only state in the world with a majority Sikh population.

The Sikh Gurus established Sikhism over the centuries, beginning in the year 1469. Sikhism was founded by the first guru, Guru Nanak, and subsequently, each guru, in succession, was referred to as “Nanak”, and as “Light”, making their teachings, in the holy scriptures, equivalent. There are a total of 11 gurus: ten human gurus and the eleventh, or current and everlasting Sikh Guru, is the integrated Sikh scriptures known as the Adi Granth or Guru Granth Sahib. 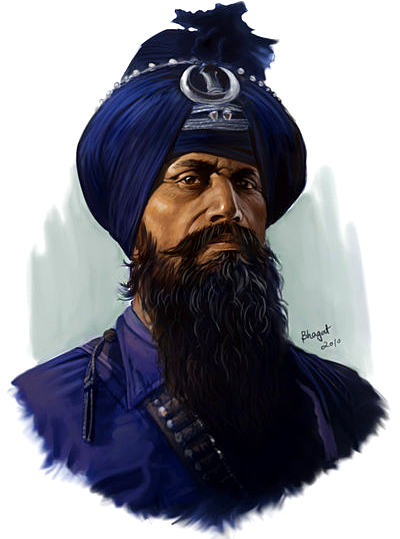 Followers of this religion are known as the Sikhs. There are about ten million Sikhs in India of whom over 85% live in Punjab. The majority of the remainder live in Haryana and Delhi. They are also scattered in other parts of India. Some Sikhs have also settled in Malaysia, Singapore, east Africa, England, the United States of America and Canada. The word Sikh means disciple. They are the disciples of their ten Gurus- the chain beginning with Guru Nanak and ending with Guru Gobind Singh.

Guru Nanak was born in 1469 in the village of Rai Bhoi di Talwandi. His father was a revenue collector. Nanak received a traditional Hindu education. From his early age only he came into the association of holy men. For some time he worked as the accountant of the Afghan Chieftain at Sultanpur. There he met a Muslim family servant, Mardana. Nanak began to compose hymns. Mardana started composing music for them and the two soon made a religious hymn-singing party. From the offering made, they organised a canteen where Muslims and Hindus could eat together. At Sultanpur, Nanak had first vision of God. He was ordered to preach mankind. While bathing in a river one day a miracle happened and Nanak disappeared. When he re-appeared on the third day he had become the ‘enlightened one’. He began preaching religious harmony between the Hindus and Muslims.

Guru Nanak visited many parts of India and preached people. He spent the last years of his life in Kartarpur where he raised the first Sikh temple. Before he died in 1539, he nominated one of his disciples, Angad , as his successor.

The execution of two Gurus, Arjun Dev and Guru Tegh Bahadur, by Mughals compelled the Sikhs to take to arms. On April 13, 1699 Guru Gobind Singh initiated five Sikhs into a new fraternity called Khalsa (Pure). He gave them a common surname, ‘Singh’ (lion). Kaur (Lioness) is the corresponding name given to all Sikh women. The number five has always had mystic significant in the Punjab- land of five rivers. The first Khalsa were the Panj Payares- the five loved ones.

Khalsa’s have five emblems, all beginning with letter ‘K’. They are ‘Kesa'(hair), ‘Kangha'(Comb), ‘Kacch’ (Drawers), ‘Kirpan’ (Sabre) and ‘Kara’ (bracelet of steel) commonly worn on the right arm.

The only object of worship for Sikhs is the Adi Granth. Worshippers make their offerings of money and flowers and receive ‘Karah Parsad’. The biggest festivals of Sikhs is Baisakhi which is also the birthday of the Khalsa-Panth itself.

Sikhism doesn’t recognize caste or classes, so everyone becomes involved in ceremonies. Communal meals are a feature of temple activities. Often accommodation and food (langar) is offered free of charges. 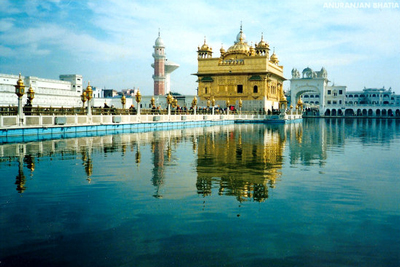 Sikh temple is called a gurudwara. Outside there is a flagpole, called a nishan sahib, flying a a triangular flag with the Sikh insignia. There is no special requirement for the design of the building. Sikhs worship only one god and are opposed to idol worship. You’ll probably see pictures of the Gurus (the spiritual leaders who founded Sikhism), especially the first, fifth and 10th (last) Gurus. The wisdom of the Gurus is contained in the Guru Granth Sahib, a book written by Arjun, the fifth Guru, in the early 17th century. It has become an object of veneration in itself and is regarded as the ‘living’ Guru.

Sikhism is an egalitarian religion and everyone is welcome to enter the temple. However, you must remove your shoes and you are supposed to cover your head.

The Golden Temple in Amritsar, Punjab, is the paragon of Sikh Temples. The holiest shrine of Sikhism, also known as the Hari Mandir, blends Hindu and Muslim styles of architecture.

The holiest shrine of the Sikh religion is also known as Hari Mandir Sahib, is located in the old part of Amritsar. The temple itself is surrounded by the pool, which gave the town its name, and is reached by a causeway. Open to all, it’s a beautiful place, especially early in the morning.

Hari Mandir standing in the middle of the sacred pool, the Golden Temple is a two storey marble structure reached by a causeway known as the Guru’s Bridge. The lower parts of the marble walls are decorated with inlaid flower and animal motifs in the pietra dura style of Taj Mahal. Once inside the temple, pilgrims offer sweet doughy prasaad to the attendants, who take half to distribute to everyone as they leave the temple. 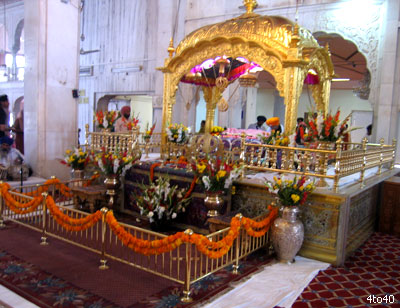 The architecture of the Golden Temple is a blend of Hindu and Muslim styles. The golden dome (said to be glided with 100kg of pure gold) is supposed to represent an inverted lotus flower. It is inverted, turning back to the earth, to symbolise the sikh’s concern with the problems of this world.

Four priests at key positions around the temple keeps up a continuous reading in Punjabi from the Sikhs’ holy book. The reading is broadcasted by loudspeaker. The original copy of the Granth Sahib is kept under a pink shroud in the Golden Temple during the day and at around 10pm each evening is ceremoniously returned to the Akal Takhat (Sikh Parliament) building. The morning processional ceremony takes place at 4:00am in summer, 5am in winter.

The central Sikh Museum is upstairs in the clock tower and comprises a gallery of painting telling the story of the Sikhs and their martyrs.

Hinduism – India is a land of religions, saints, rivers and holy places. There is …