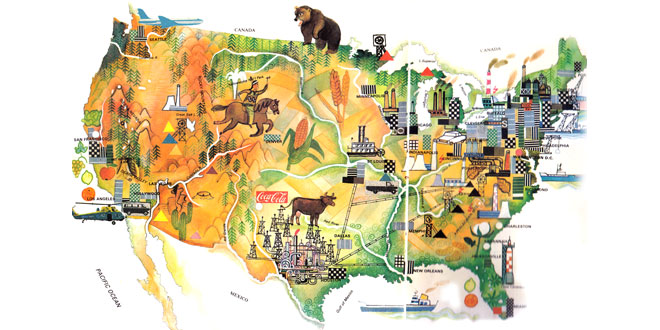 System of government: Federal Republic
Capital: Washington, D.C.
Location: In the central part of North America, bounded by the Atlantic in the east, Canada in the north, the Pacific in the west and Mexico in the south
National composition: Non-Hispanic whites make up 63 percent of the U.S.; Hispanics, 17 percent; blacks, 12.3 percent; Asians, 5 percent; and multiracial Americans, 2.4 percent.
Religions: Major religions include Protestant, Catholic, Jewish, Orthodox
Official language: English
Currency: US dollar = 100 cents
Administrative divisions: The U.S. is a country of 50 states covering a vast swath of North America, with Alaska in the northwest and Hawaii extending the nation’s presence into the Pacific Ocean. Major Atlantic Coast cities are New York, a global finance and culture center, and capital Washington, DC. Midwestern metropolis Chicago is known for influential architecture and on the west coast, Los Angeles’ Hollywood is famed for film making.
Other major cities: New York City, Chicago, Los Angeles, Philadelphia, Houston, Detroit, San Diego, Baltimore, San Antonio, Dallas and there are another 115 cities with a population more than 100,000
Highest elevation: Mt McKinley (6,194 m), in the Alaska Range
Chief rivers: Draining into the Gulf of Mexico: the Mississippi, with its tributaries Missouri, Ohio, Arkansas and Red River; also the Rio Grande and the Rio Brazos; draining into the Atlantic: the Hudson and St Lawrence; draining into the Pacific: the Columbia and the Colorado; draining into the Bering Sea: the Yukon
Largest lakes: Michigan and other US/Canadian lakes of the Great Lakes group: Superior, Huron, Ontario, Erie; Great Salt Lake
Climate: Temperature in the north, subtropical in the south, maritime along the Pacific coast; sub-arctic and arctic in Alaska and subtropical and wet tropical in Hawaii

Between the two main ranges lie a number of large plateaux and basins: the Columbia Plateau in the north, south of it the Great Basin with the Great Salt Lake, and further south the drainageless depression known as the Death Valley which lies 85 metres below sea level. Death Valley is an arid sandy desert where temperatures reach above 50 degree celsius. The Rocky Mountains descend eastward into the treeless Great Plains and the Great Central Lowlands. Around the Mississippi River lie the extensive Mississippi Plains. Along the east coast run the Appalachian Mountains, while the Atlantic sea board is taken up by the Atlantic Plains marked by marshland and sand dunes. The Yukon River Basin in Alaska is bounded by the Brooks Range in the north and the Alaska Range in the south, the highest massif of the Cordilleran system. The Hawaiian Islands in the Pacific are mountainous, a product of volcanic activity.

The United States has many rivers, most of them with abundant flows. They are used for navigation, irrigation and some have been harnessed by hydroelectric schemes. The largest scheme is the Hoover Dam on the Colorado River, the biggest of its kind in America.

The Great Lakes are interconnected by navigable rivers and the Niagara Falls are by-passed by the Welland Canal. The Great Lakes are linked to the Atlantic by the St Lawrence Seaway and canals link them with the Mississippi system.

The vegetation differs according to temperature and percipitation. Alaska is the land of permafrost tundra with taiga further south. The eastern states are characterized by deciduous and mixed forest. The slopes of the Cordilleran system are covered by coniferous forests (pines, redwood and Douglas fir). The vegetation of the south is evergreen. California with its dry hot summers has various cacti, succulents, drought-resistant grasses and evergreen shrubs. This type of vegetation is known as chaparral and is very similar to the macchia of the Mediterranean region.

The wildlife resembles that of the Euroasian land mass, with some special features. Alaska is the land of the arctic hare and fox, bear, caribou, moose, elk, wapiti, beaver, opossum and mink. In the prairies lives the almost extinct buffalo, the badger, mustang, wolf, jack-rabbit, various small rodents, pelican and heron. California has deer, rabbit, cougar, the desert wildcat, and various species of lizard and bird. In the lagoons along the Gulf of Mexico and in coastal swamps live the alligator and cayman.

The United States government does much to preserve the natural environment. Many large areas have been incorporated into national parks, the largest and best known of which it the Yellowstone National Park. Also protected are snow-fields and glaciers of Alaska including the highest peak of North America, Mt McKinley, as well as the Florida Everglades, a large tract of subtropical swampland containing alligators and many species of waterfowl. Other well-known reserves include the Olympic and Yosemite national parks, the breath-takingly beautiful Grand Canyon of the Colorado River, the Mesa Verde National Park with its Indian rock dwellings, and the coral reefs of the Virgin Islands National Park, to name but few.

The United States is the world’s biggest industrial giant, contributing about 33 per cent of industrial and about 20 per cent of agricultural production to world economy. The country’s economy is marked by mass production and the use of sophisticated mechanized and automated technology.

Animal husbandry is the mainstay of United States agriculture, making the country the world’s leading producer of meat, milk and eggs. The leading cash crop is maize, closely followed by wheat, oats, barley, rice, cotton, flax, tobacco, soya, potatoes and vegetables. Relatively small acreages are sown with sugar-yielding plants. Fruit-growing is concentrated in California, Florida and Hawaii, while apple-growing is a specialty of Oregon and Washington. Chicago is the traditional centre of the meat-processing industry, while Minnesota, Wisconsin and other northern states are the leading dairy producers. Beef is the number-one stock, followed by sheep, pigs and poultry. American agriculture is highly mechanized, employing only some two per cent of the national labour force and relying on high-quality seed, much fertilizer and specialized production.

The country produces much power, using oil, gas and coal fired power-plants, hydroelectric schemes as well as nuclear facilities. Apart from mining and metallurgy, the leading industry is engineering which produces practically everything, and is famous especially for automobiles, heavy engineering, agricultural machinery, aircraft and rocketry and shipbuilding. It is closely followed by the provision and production of electronics and electrical engineering, chemicals, optics, precision instruments, printing machinery, rubber, textiles, food-stuffs, timber, paper and pulp and building materials. The United States is also the world’s leading producer of tobacco products.

Industry is concentrated in the industrial belt which is about 300 kilometers wide and stretches from Boston to Chicago. The South and Mid-west are predominantly agrarian in character, the West has stock-farming, mining the manufacturing of aircraft, and the film industry.

The industrial production and vast distances make an efficient transport system essential. The United States has a dense system of electrified railways, some six million kilometers of roads, highways and superhighways. The country is crossed by the Pan-american Highway which links Alaska with South America.

The country is also the largest air carrier, with many international and local airlines serving some 14,000 airports. The busiest air junctions are Chicago, New York, San Francisco, Long Beach, Miami, Dallas/Fort Worth, Washington D.C. and Atlanta.

The most important inland ports are Duluth, Detroit, Chicago, Cleveland and Buffalo.