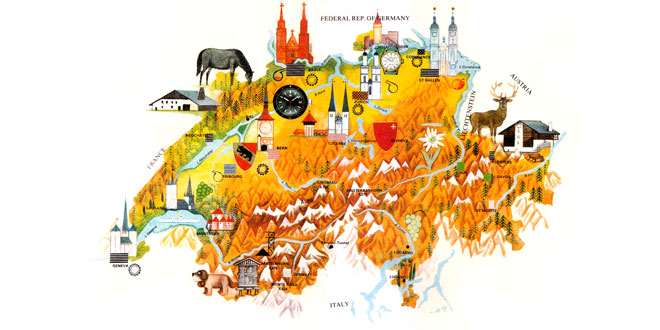 Switzerland is a beautiful country with three main land regions: the hilly Central Plateau (or Mitelland) in the north; the Jura mountains in the west; and the magnificent Alpine ranges in the south, which make up about 60 percent of the country. There are many lakes, mostly of glacial origin. The largest are Lake Geneva (Lac Leman), Lake Neuchatel, Lake Lucerne (Luzern, Vierwald-stattersee) and Lake Constance (Bodensee) on the central Plateau, and Lake Maggiore, south of the Alps on the Italian border. Switzerland’s rivers descend rapidly from the mountains, often over spectacular waterfalls. They have their greatest velocity in July and lowest in January and February. Seasonal winter floods occur only on the middle and lower Rhine and on the Aare.

Woodland once covered most of Switzerland up to the timber line. But forests now occupy only about one-fourth of the country. The flora of the Alpine region is highly varied. Typical plants include the alpine rose, edelweiss and gentian. Various animals, such as the brown chamois, eagle, ibex, marmot and wild cat, survive in the mountains. Unspoilt areas are now protected by law.

Farmland covers about a quarter of Switzerland and agriculture employs only 5 per cent of the work-force. Livestock and dairy farming are the main activities. Cereals, fruit, grapes (for wine–making), and sugar beet are important crops.

Although Switzerland possesses only modest resources, including some asbestos, coal, iron, ore, manganese, oil and rock salt, industry is the chief activity, employing 46 per cent of the work-force in 1980. The shortage of fuels is balanced by great resources of hydroelectric power. Swiss industry is famous throughout the world for its superb precision instruments, such as chronometers and watches. Today, chemicals, pharmaceuticals, textiles, chocolate and dairy products are all important, while engineering companies manufacture highly reliable machinery, turbine, engines and railway locomotives.

Most Swiss railways are electrified and special rack (cogwheel) lines climb to high altitudes, taking skiers and tourists to famous Alpine resorts. An excellent system of roads and motorways can easily handle the substantial tourist traffic, as well as international freight haulage. Although relatively small, Switzerland’s advanced industry and agriculture, its prosperity, its strategic position in the heart of the European continent, and also its traditional policy of neutrality (guaranteed since the Congress of Vienna in 1815) have made the country one of the leading banking, financial and diplomatic centers of the world.