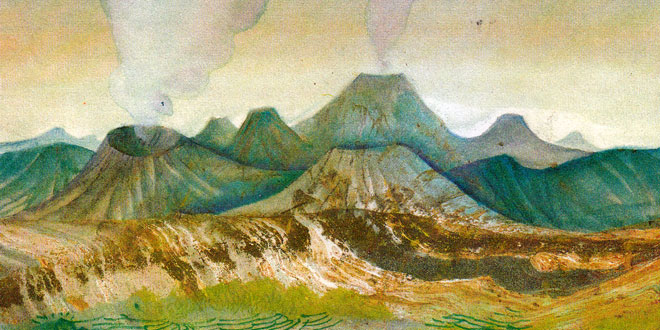 Most of the Indonesian islands are mountainous, containing many extinct and active volcanoes. In this unstable region, earthquakes and volcanic eruptions are common place. The rivers are mostly short, with sizeable volumes throughout the year. They form a dense system of water ways. In their lower courses, many rivers flow across swampy coastlands. Indonesia’s largest lake, Toba, is in Sumatra. Lush evergreen rain forests containing many valuable hardwoods cover great areas, with mangroves in coastal marshes and savanna in the uplands. The animal life is rich, with species as leopard, orangutan, Javan and Sumatra and rhinoceros, tapir and tiger still being found in the forests. There are also many species of snakes, lizards and fish.

Agriculture, forestry and fishing employed 58 percent of the work-force in 1980, as compared with 12 percent in industry. Indonesian farmers produce coconuts, coffee, jute, manioc, rice, natural rubber and tea. The country has reserves of bauxite, coal, copper, nickel, oil and tin. Mining is now the most important sector of the economy and oil is the leading export. Wood and rubber are other major exports. Shipping is the leading means of transport. The largest airport is at Jakarta.