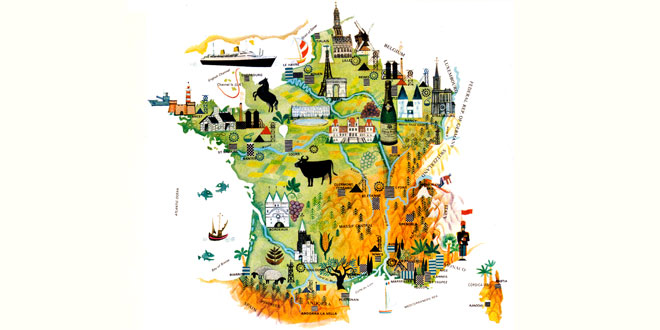 System of government: Republic
Capital: Paris
Location: In western Europe, bounded by the Atlantic in the west, Belgium and Luxembourg in the north-east, the Federal Republic of Germany, Switzerland and Italy to the east, and Spain to the south
Area: 547,026 sq km
National composition: Mainly French; foreign-born people, including Portuguese, Algerians, Spainards and Italians made up 6.5% of the population in 1975
Religion: Mainly Roman Catholic
Official language: French
Currency: Franc = 100 centimes
Administrative divisions: France is divided into 27 administrative regions: 22 regions in metropolitan France (including the territorial collectivity of Corsica), and five located overseas.
Other major cities: Marseilles, Lyons, Toulouse, Nice, Nantes
Highest elevation: Mont Blanc in the Alps
Chief rivers: Loire, Seine, Garonne, Rhone
Climate: Mild and wet in the north-west, becoming increasingly continental towards the east and subtropical continental towards the east and subtropical towards the Mediterranean, where summers are hot and dry and winters mild and moist

France, the second largest country in Europe after the USSR, has many varied land regions. More than one-third of the country is taken up by the Paris basin, which is a saucer-like depression ringed by a series of escarpments and low ranges of hills. This is a rich and fertile region, with famous vineyards on many of the south-facing slopes. South of the Paris basin is the Loire valley and the Gate of Poitou which leads to the south-western Aquitaine basin.

The highest parts of this region are plateaux that border the Massif Central in south-central France. Other lowland regions include the Rhine valley in the north-east and the Rhone-Saone valley in the south-west.

The western Atlantic and North Sea coasts are bordered by a shallow continental shelf, although tides are high, especially in funnel like river estuaries, like that of the River Rance where the incoming and outgoing tidal currents drive generators that produce electricity, The western coast has several popular seaside resorts. The Mediterranean coast is also a popular tourist region, especially in the south-east, where the Cote d’Azur (the French Riviera) is one of the world’s best known resort areas. However, unlike the Atlantic coast, the slope of the shore is steeper and the water deeper. Also, the water is warmer and the tides extremely low. Because the coast lacks strong tidal currents to remove rubbish, pollution of the coastal waters is a problem.

France has several upland and mountain regions. The youngest and highest mountains belong to the Alpine system. They include the Pyrenees, which straddle the border with Spain, and the Jura and Alps in the south-east, and the large Massif Central in the south. The Massif Central contains some superb scenery, such as in the limestone plateaux of the Causses, with their caves, gorges and plunging sink or pot holes. The Mont Dores area is broken by strange volcanic features. The Dordogne, Garonne, Loire and Seine rivers all rise in the Massif Central. Other attractive uplands are in Brittany and Normandy in the north-west. Here the coast is deeply indented by drowned river valleys, or rias, like those in western Ireland.

Most French rivers, including the Adour, Garonne, Loire and Seine, empty into the Atlantic Ocean. The largest river flowing into the Mediterranean is the Rhone. The Alps, Pyrenees and Vosges mountains contain many lakes formed by glacial action.

The lakes in the Rhone delta are formed behind barriers of sediment dumped there by the river. Many mineral and thermal springs are found in the Pyrenees and the Massif Central. The best known mineral springs are at Vichy, an internationally known health resort.

Forests of mostly deciduous trees cover about one-fifth of France. The Mediterranean coastlands are characterized by garrigue, a sparse growth of grasses, shrubs, wild thyme, rosemary and lavender, and the maquis, a maze of brushwood composed mainly of oleander, heath and aromatic plants. The alpine flora is rich. Here conifers, alpine roses and such wild flowers as gentians abound.

Almost three-quarters of France is suitable for various forms of farming. Animal husbandry is slightly more important than crop farming, and France is a major world producer of meat and milk. It is also the world’s leading grape grower and producer of top-quality wines and liqueurs. Other major crops include barley, fruit of many kinds, maize, oats, potatoes, vegetables and wheat. Large areas are irrigated. France also has oyster and freshwater fish farms, and deep-sea fishing is another important source of food.

Agriculture, forestry and fishing employed 8 per cent of the work-force in 1980, as compared with 39 per cent in industry. France has rich deposits of iron ore (the country’s total electricity and there are also coal and gas fired plants. However, many raw materials must be imported.

The industrial sector in France is highly developed and diversified. Metallurgy and engineering, especially the manufacture of vehciles, machine tools, textile machinery, electric and electronic equipment, aircraft, instruments, radar equipment, lasers and so on. The chemical industry produces cosmetics, pharmaceuticals and rubber products. French fashion and footwear set the world style. The food-processing industry is known for many delicacies, notably over three hundred types of cheese.

The transport system is one of the world’s best. The dense rail network, including some high speed trains, roads and motorways form an integrated system. There are also extensive waterways, with many canals connecting the navigable rivers. French air transport and shipping are also important. The national airlines are Air France, UTA and Air Inter.

France, a founder member of the European Economic Community in 1957, is among the world’s most developed industrial and agricultural nations. Its per capita gross national product in 1981 was US $12,190 giving it fourth place among the EEC countries.

Throughout history France has often influenced other parts of Europe and its language and culture have spread around the world. Its historical monuments, rich art treasures and fashionable resorts attract millions of tourists every year.

France also includes several Overseas Departements, including French Guiana on the north coast of South America; Guadeloupe and Martinique in the Lesser Antilles in the Caribbean; Reunion in the Indian Ocean; and St Pierre and Miquelon , an island group off the east coast of Canada. Mayotte off Madagascar, which geographically belongs to the Comoros, has a status between an Overseas Departements and an Overseas Territories, all in the Pacific Ocean: French Polynesia, New Caledonia, and the Wallis and Futuna islands.