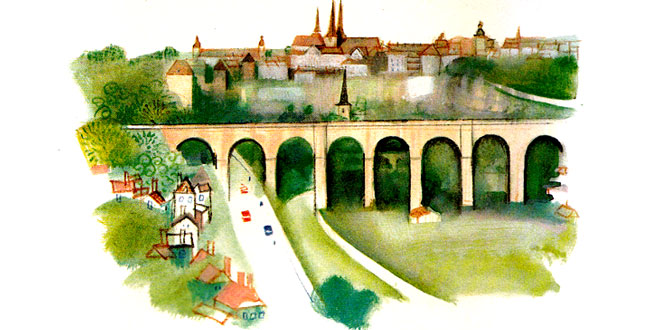 Northern Luxembourg contains part o the rugged Ardennes plateau, while the warmer south includes the fertile valleys of the Moselle and its tributaries. Farmland covers about half of the country. The chief crops include barley, oats and potatoes, grown mainly in the north, and fruit and wheat in the south. The country also has a major wine industry.

The Netherlands, Belgium and Luxembourg form a customs and economic union known as Benelux, and all three countries were founder members of the European Economic Community. Lenient tax and corporation laws have attracted about 100 large banks and many corporations to establish their headquarters in Luxembourg. A measure of its prosperity is that, in 1981, Luxembourg had a higher per capita GNP than any other EEC nation.

The country has an excellent road system and is crossed by major railway lines connecting France with Belgium and Germany. Radio Luxembourg, a pop music station favoured by many young people throughout Europe, is situated in the country.