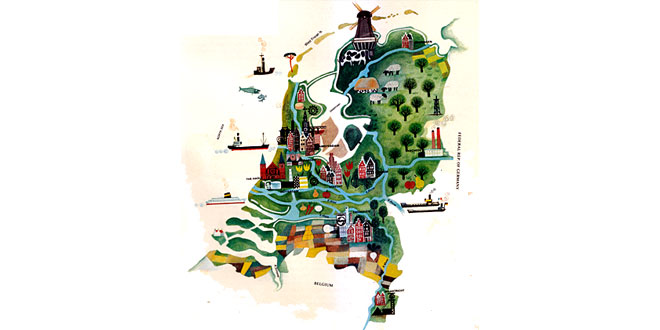 The Netherlands: World Encyclopedia for Students and Children

The Netherlands forms part of the Low Countries, a name which well characterizes the relief of this small kingdom facing the North Sea. There are many large, shallow depressions which are below sea level at high tide. Numerous low bars and dunes divide the river estuary region into several areas. The land rises gently to the east.

The history of the Dutch people has been marked by an incessant struggle against the sea. For hundreds of years, the Dutch have reclaimed from the sea huge areas, called polders, which are now used for farming. The fertile polders are protected by belts of natural sand dunes and man-made dykes (walls) which hold back flood waters. About 40 per cent of the country is reclaimed land. In the polders that lie below sea level, windmills pump out water. These windmills are a characteristic feature of the Dutch landscape.

The country’s original vegetation has survived only in some parts of the north, where the sandy soil and large peat bogs support heath and sparse pine and oak woods. The most wooded part of the Netherlands is the Groningen province. Typical wild animals in the north include the hare, partridge, pheasant and snipe. The southern forests contain badgers, red deer, roe deer, foxes and pine martens. The bird life is generally abundant, especially in marshy and coastal regions.

Nearly three-quarters of the total land area is used for farming. The major crops are potatoes, sugar beet and wheat. Dutch horticulture is renowned for its vegetables, fruit and, especially, such flowers as tulips, and various bulbs. Pastoral farming is concerned mainly with the production of milk and other dairy products. Apart from cattle, pigs and poultry are also reared. Most farms are small, but yields are among the world’s highest. Fishing, especially for herring, is an important sector of the Dutch economy.

In 1980 agriculture employed only 6 per cent of the work-force, as compared with 45 per cent in industry. Mineral resources include rich natural gas fields, oil, bituminous coal, salt, kaolin clay and peat. However, most raw materials used in the manufacturing industries are imported. The leading branch of industry is engineering. The Netherlands produces cranes and hoisting equipment, steel structures, air conditioning plants, and machinery for food-processing, paper and textile industries. Shipbuilding, ship repair and manufacture of cargo handling technology are also important in the economy. Dutch electronics and precision engineering are known internationally for their outstanding quality. Also important are various dairy products and textile, leather and chemical industries. Diamond cutting has also been a Dutch specialty. The country has a dense network of railways, roads and inland water ways. The chief port is Europort near Rotterdam, which handles much of the waterborne trade of the Federal Republic of Germany.

The Netherlands, a founder member of the European Economic is Community in 1957, is a highly developed, prosperous country, with a per capita gross national product in 1981 of US $11,790. The country is known for its artistic traditions, especially in the field of painting.