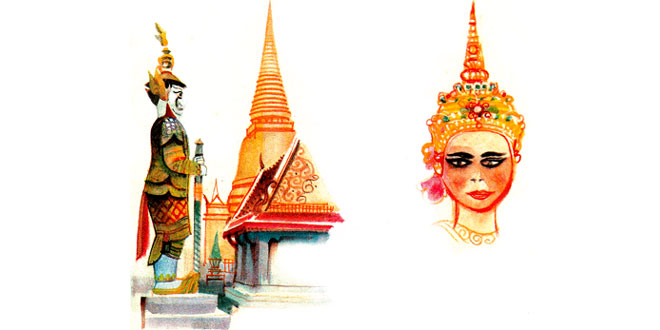 Northern and western Thailand are mountainous, while the centre contains fertile alluvial plains. Another arid plain is in the east. Forests cover about 60 percent of Thailand. They contain such valuable trees as teak. The wildlife includes elephants, the traditional symbol of the country, and monkeys.

Agriculture dominates the economy. It employed 76 percent of the work-force in 1980, as compared with 9 percent in industry. The chief food crop is rice, but maize and sugar cane are also widely cultivated, as are cotton, jute, rubber trees and tobacco. Pigs and cattle are the most important farms animals. Fishing is a major occupation in coastal areas.

Thailand has considerable mineral resources. It is the world’s fourth largest producer of tin, and it also has deposits of fluoride, iron ore, lead molybdenum, tungsten and zinc. The most important branch of industry is mining, but other industries, such as iron and steel production, food and tobacco processing and textile manufacturing, are being developed. Industry is not as yet a major employer, but it contributes 28 percent of the gross domestic product, as compared with 22 percent from agriculture.