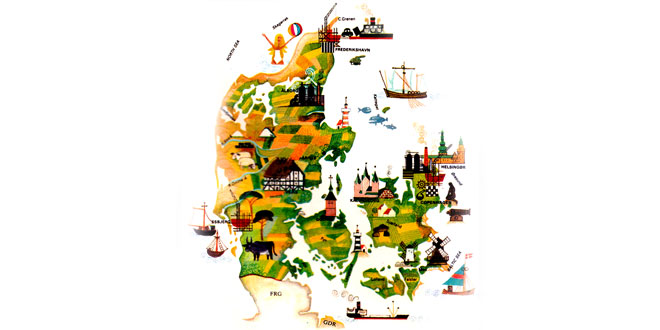 Denmark consists of the Jutland (Jylland) peninsula, which contains the country’s highest point, and about 500 islands, none of which rises higher than 143m above sea level. This low-lying country is made up of plains, rolling hills, moraine ridges and broad valleys. There are many lakes formed during the Pleistocene Ice Age and coastal lagoons protected from the sea by sand dunes. Forests occupy about one-tenth of the total area.

Crops are grown on about 60 per cent of the land, while 30 per cent is meadow and pasture. Danish agriculture is perhaps the most advanced and best organized in the world, although it accounted for only 5 per cent of the gross domestic product in 1982. The livestock farming industry produces butter, milk, cheese, bacon and meat, which are international known for their quality. Danish farmers breed high-yield breeds of cattle, pigs, poultry and sheep and much breeding stock is exported. The chief crops are barley, fruit, oats, potatoes, sugar beet, vegetables and wheat. Fishing is also important in the economy.

Denmark’s prosperity, however, is now based on industry, which accounted for 24 per cent of the gross domestic product in 1982 (71 per cent came from service). Denmark’s resources do not meet the needs of its manufacturers, although some brown coal, kaolin and lignite are mined and building stone is quarried. Recently, oil and natural gas have been tapped off the west coast. However, the manufacturing industries are highly advanced and specialized. Shipbuilding and the manufacture of ships’ engines are extremely important. Danish farm machinery, electrical engineering, precision instruments and electronics have excellent reputations. Their food-processing and brewing are highly developed. Other major products include chemicals, pharmaceuticals, porcelain and textiles. Metallurgy is a rapidly growing industry.

Because much of Denmark is made up of islands, the demands on the transport and communication systems are high. A well organized system of ferries connects the islands and Jylland. Some ferries also operate on international routes, providing connections with west Germany, Sweden and Norway. Shipping and air transport are also important. The largest sea port and international airport are at Copenhagen.

Denmark is a prosperous country with highly developed farming and manufacturing industries. Its per capita gross national product in 1981 was US $13,120, the third of the ten nations in the European Economic Community, which Denmark joined in 1973.