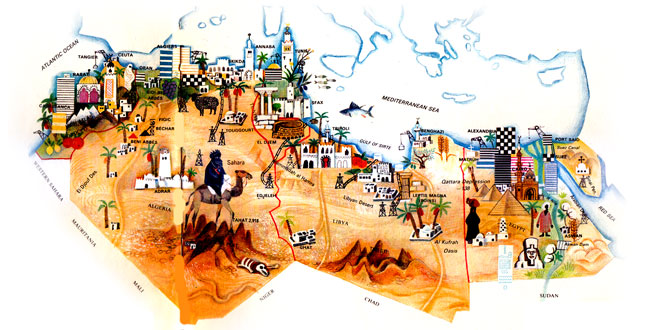 System of government: Republic
Capital: Cairo
Location: In north-eastern Africa, facing the Mediterranean and the Red Sea; part of the territory (the Sinai Peninsula) is in Asia. The country borders on Libya, Israel and the Sudan
Area: 1,001,449 sq km
National composition: Arabs (98%), Nubians and Berbers
Religion: Islamic
Official Language: Arabic
Currency: Egyptian pound = 100 piaster = 1,000 millim
Administrative Divisions: Egypt is divided into 27 governorates (muhafazat) and each has a capital and at least one city.
Other major cities: Alexandria, El-Giza, Port Said
Highest elevation: Katherina (2,637 m) in the Sinai Peninsula
Chief river: Nile, with Lake Nasser held by the Aswan Dam
Climate: Subtropical of the Mediterranean type in the north: arid desert type in the south

The major part of the Egyptian territory is made up of inhospitable deserts studded with only a few score populated oases. In the west lies the vast Libyan Desert, while the Red Sea coast is fringed by the stony Arabian Desert. These two tracts of arid lane are separated by the Nile. For millennia, Egyptians have been able to survive because of this mighty river, which floods large tracts of land each year creating fertile sediments which permit the farmers to cultivate cotton, one of Egypt’s chief export commodities. Wheat, rice, maize, dates, groundnuts, fruit, vegetables, tobacco and flax are also grown. Most fields are irrigated by water from the Nile. Irrigation combines to permit the growth of two even three crops each year. Animal husbandry is limited due to lack of available animal fodder. Most of the animals kept by the fellahin (peasants) are beasts of burden.

The Nile is the main artery of Egypt and practically all life of the country is considered within its valley. There are fertile fields, bustling towns and sleepy farming communities. All major roads and railways follow the line of the Nile. The largest cities are located in the Nile delta where Egyptian industries, concentrated in the overpopulated cities, find enough cheap labour. The greatest number of industrial workers is employed in the textile industry, processing quality long-fibre cotton, jute, wool and silk. The Egyptian food-processing industry produces sugar, flour, cotton-seed oil, cheese, butter and tinned food. Metallurgy, engineering, the chemical industry and oil refineries are rapidly being developed. Egypt’s largest mineral resources are oil from the Sinai Peninsula and phosphates, rock salt, iron and manganese ores which are mined along the Red Sea Coast.

The Nile is also the backbone of the transport system. In the delta lie the major international ports of Alexandria, Suez and Port Said. International shipping depends greatly on the strategically located Suez Canal, which connects the Mediterranean with the Indian Ocean via the Red Sea. Air traffic is steadily growing, with the busiest airports in Cairo, Alexandria and Aswan. However, haulage from the Nile valley to oases in the western desert is still largely dependent on camel caravans.

Egypt is one of the cradles of civilization. Large numbers of tourists from all over the world visit the country every year to see the pyramids and other monuments of the ancient Egyptian culture.