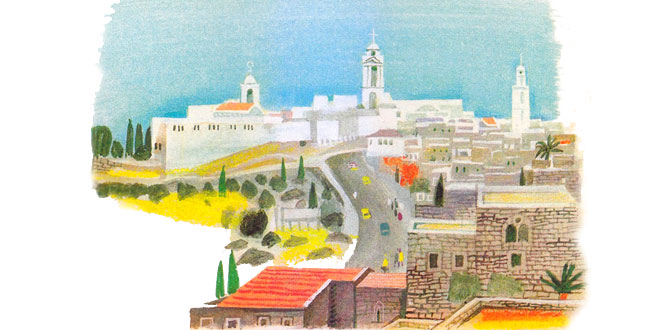 Along the Israeli coast is the fertile Sharon Plain. Central Israel contains the north-south chains of the Hills of Galilee, while the south contains the hot and inhospitable Negev Desert. The only river with water throughout the year is the Jordan, which flows through the Sea of Galilee (Lake Tiberias) and empties into the Dead Sea. The river is used for both for irrigation and for the generation of electric power.

Much of the farmland is irrigated and cereals, citrus fruits, cotton, grapes and sugar beet are grown. Cattle, sheep, goats and poultry are reared and fish farming and bee-keeping are other important activities. In 1980 agriculture employed 7 per cent of the work-force, as compared with 36 percent in industry. Israel has a highly developed mining industry. Bromine, magnesium and potash are mined in the Dead Sea district, while copper and phosphates come from the Negev Desert. There are also deposits of oil and natural gas, marble and materials for the ceramic and glass making industries. Manufacturing is highly sophisticated. Manufacturers produce cars, plastics, pharmaceuticals, fertilizers, textiles and processed food. Shipbuilding is also important and diamond cutting is a famous speciality. The country has a good system of railways and roads and a dense network of airports. Shipping is important and Israel operates a major international airline, EI Al. Israel is the most economically developed country in the Middle East.