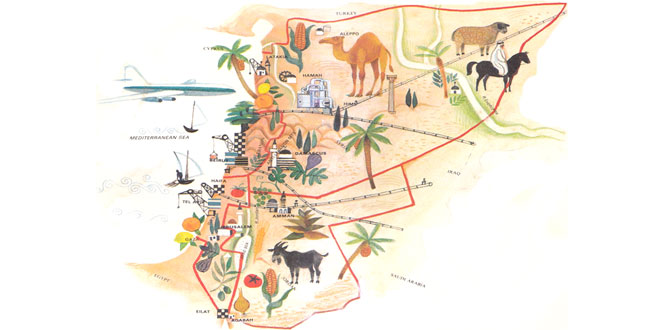 Syria is a mountainous country with some fertile plains along the coast and in the valley of the Euphrates, where cereals, citrus fruits, cotton, olives and tobacco are grown. Farmers also rear cattle, sheep and goats. The Lebanon and Anti-Lebanon ranges rise in the west, while desert occupies much of southern Syria. The flora and fauna are generally of the steppe and  semi-desert types.

The country’s main mineral assets are oil, natural gas, phosphates, asphalt and rock salt. Petrochemicals, processed foods and textiles are among the leading industries. Local arts and crafts flourish throughout the country.

Syria has three main railway lines and the largest towns are connected by surfaced roads and by air. There are several seaports with oil pipeline terminals.