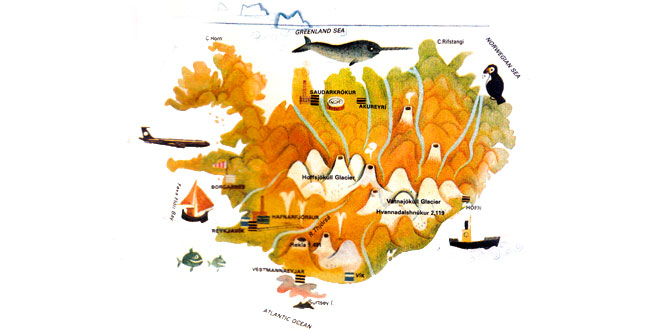 Iceland consists largely of a plateau, with large glaciers and lava fields in the South and east. There are numerous thermal springs and geysers gush upwards in places. The hot water from some thermal springs is used to heat towns and large areas of greenhouses. Iceland has about 100 volcanoes, some of which are active. In November, 1963, volcanic activity off the southern coast of Iceland created a new island, named Surtsey. Glaciers cover more than one-tenth of Iceland. Their erosive power is evident on the western and northern coasts which are deeply indented by ice-worn fjords and numerous bays. The rivers are short but fast-flowing and with relatively large volumes. Waterfalls are characteristic features of the Icelandic landscape.

The country has few forests, partly because of the severe climate in the interior, where summers are short and cold, and partly because of deforestation in the past. However, since the end of the Second World War, large reafforestation projects have got under way. Few mammals are found, but a great number of birds live in and around Iceland.

Only about half of one per cent of the land is cultivated and the economy depends on fishing. The chief fish are cod, haddock, halibut, herring and plaice. Iceland exports large quantities of fresh, frozen and tinned fish, fish-meal and fish oil. Some sheep and cattle are grazed on the interior grasslands. The chief crops are potatoes and turnips, but heated greenhouses produce considerable amounts of vegetables, tomatoes, cucumbers and flowers.

Iceland has no significant mineral resources. Liparite (or rhyolite) and sand are quarried and seashells are dredged to make cement. There is some natural gas. The food-processing industry manufactures milk products. Leather goods, furs, woollens and carpets are also produced, and plastics and aluminium are made from imported raw materials. However, despite its limited resources, Iceland has the high per capita gross national product of US $12,860 (1981).

Iceland has no railways and the transport system depends on roads, aircraft and coastal shipping. The Keflavik International Airport is a major refuelling point on some transatlantic routes.