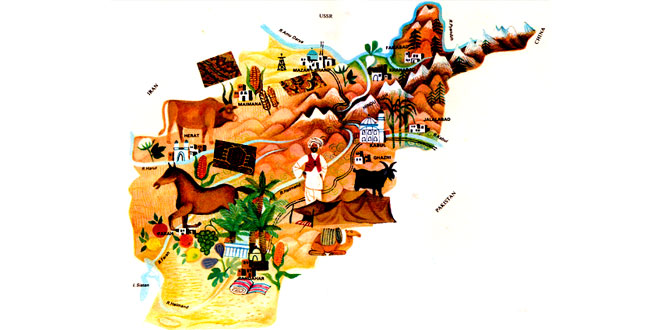 System of government: Republic
Capital: Kabul
Location: Afghanistan is a landlocked country in south-central Asia, with borders with the USSR to the north, China, Pakistan to the east and Iran to the west.
Area: 647,497 sq km
National composition: The population is mixed; Indo-European Pathans make up about 50 percent and Tadzhiks about 30 percent of the population. Other groups include Hazeras, Turkomans, Uzbeks and so on. About 2.5 million people are nomada.
Religion: Islam
Official languages: Pushtu (Pashtu), Dari (a dialect of Farsi)
Currency: Afghani = 100 puls
Administrative divisions: 29 provinces
Other major cities: Kandahar, Herat
Highest elevation: Nowshak in the Hindu Kush
Chief rivers: Helmand, Panj (Pyandzh)
Climate: Arid and continental

Northern Afghanistan includes the lofty Hindu Kush where most of the rivers originate. Large deserts cover the south. Afghanistan has an agricultural economy. Cattle, sheep and goats are raised in mountainous areas, with camels and donkeys in the deserts. Afghanistan is famous for lambkins known as karakuls. The chief crops are cotton, maize, oil plants, pomegranates, rice and wheat.

The country has some minerals, the most important being bauxite, coal and oil and natural gas. There is little industry.