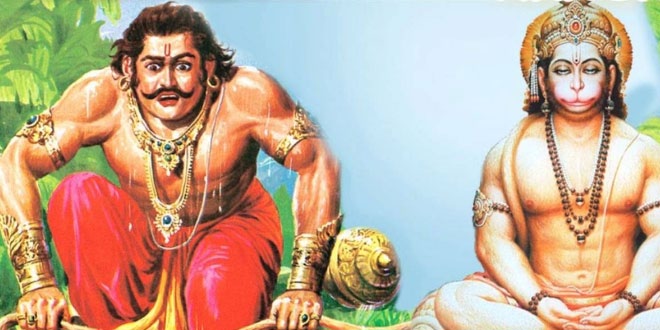 The venerable ape also features in the great epic Mahabharata. How Hanuman met the valiant Bhima, one of the Pandava brothers is itself a marvelous tale. He recognized Bhima as his spiritual brother, since both were born with the blessings of Pavana, the Wind God, and promised to aid the Pandavas in the big battle of Kurukshetra (now in Haryana state of India). Hanuman positioned himself in the flag of Arjuna’s chariot to secure and stabilize the war-craft. The triangular saffron flag of Hanuman stands for stability and equilibrium, sense-control and mind-control, and a sure sign of victory over all that is base and evil.

The second encounter is with Arjuna who wonders why Lord Rama needed the help of monkeys to build a bridge. Hanuman appears in the form of a normal monkey and challenges Arjuna that his bridge would collapse even under the weight of one person. Arjuna says that if that happens he will jump into a fire.

When Arjuna builds a bridge with just his arrows and Hanuman steps on it, the bridge breaks. When Arjuna tries to jump into fire, Lord Krishna appears and repairs the bridge which does not break again.

Hanuman then reveals his form and tells Arjuna that he will support him in the Kurukshetra war. Hanuman fights alongside Arjuna till the end.

Hanuman has a crucial part to play!

When Hanuman met Arjuna and Bheema

So, we find Lord Hanuman being mentioned in Mahabharata. Lord Hanuman is also considered the brother of Bhima as they have the same father, Vayu. Therefore the first mention of Lord Hanuman in Mahabharata comes when He meets Bhima during the Pandavas exile and the second time when Lord Hanuman protected the chariot of Arjuna throughout the battle of Kurukshetra by residing in Arjuna’s flag.