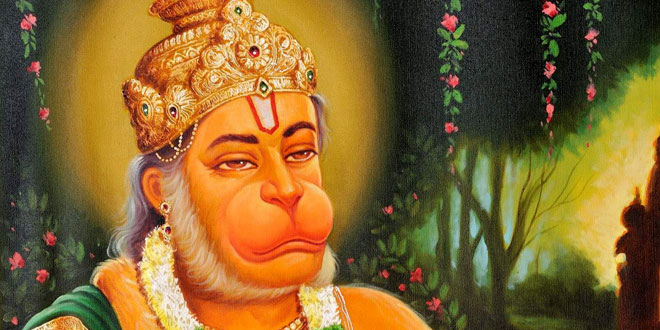 Hanuman Jayanti Information: On Chaitra Shukla Purnima, i.e., the full moon day of March-April, Hanuman Jayanti is celebrated all over the country. The monkey-God Hanuman is worshiped everywhere in India either alone or together with Lord Rama. Hanuman temples dot the entire length and breath of the country. Every temple dedicated to Rama invariably has an idol of Hanuman. In other temples also Hanuman is found installed.

The birth anniversary of Hanuman, the son of the wind-god Marut and Anjana Devi, is celebrated with great religious fevour. people visit the Hanuman Shrines, observe strict fast, offer prayers and Puja, and read the Ramayana and the Hanuman Chalisa. On the occasion the idols of Hanuman is given a new coat of vermilion mixed with clarified butter and then richly decorated. Fairs are also held at some places near the shrines and charities done.

Hanuman is one of the greatest embodiments of strength, speed, agility, learning and selfless service to Lord Rama. He could fly at the speed of wind, uproot mountains and trees assume any size and shape at will and make himself invisible. In battlefield he was a terrifying figure, as colossus as a mountain, as tall as a tower and ever invincible. his face is red like ruby, his yellow skin and coat shines like molten gold and his mighty tail is of immense length. He shattered the enemies in the battlefield with his fierce roar. He is immortal, and this immortality was granted to him by Rama to serve the devotees in distress. His great adventures have been described in great detail and with much reverence and delight in the Ramayana.

He is living embodiment of Nishkam Karmayoga, love, sincerity and ram-nam, Rama and Hanuman are inseparable. His celibacy is of the highest order and he did things which were almost impossible for others for the sake of love of Lord Rama. On Hanuman Jayanti people observe fast, meditate on him and his Lord Rama, practice charity, read the Hanuman Chalisa and spend the day in repeating his glories and adventures and be blessed.

“We bow to Hanuman, who stand with his palms folded above his forehead, with a flood of tears flowing down his cheeks wherever the Names of Lord are sung.”