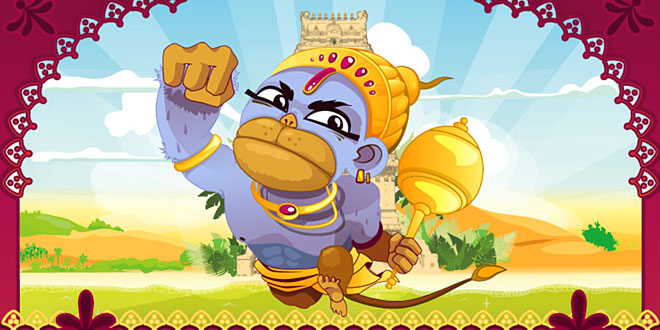 Once upon a time, long ago, there lived in India a monkey-boy called Hanuman. His father was Vayu, the god of the winds, and his mother was a monkey princess. Although he was only little, Hanuman had magic powers. He was also naughty.

This is the story of some exciting adventures, which began in the beautiful valley of flowers, where one day Hanuman sat with his mother in the warm sunshine. Hanuman looked up into the sky and saw the sun.

“How beautiful it is, so warm, so warm, so golden and so bright. I’d love to hold it and play with it as if it were my very own!”

He reached up, caught hold of the sun and started throwing it up and down as though it were a ball. The sun was not pleased, and began to feel rather ill.

The sun called out to Indra, the god of thunder and lightning, who was riding by on his magic elephant.

“Help! Indra! Look at what this naughty monkey-boy is doing to me! Help!”

Indra was very cross with Hanuman.

“Put the sun back at once”, he said in a mighty voice.

“NO”, said Hanuman, who was not afraid.

In fury Indra shot a bolt of white lightning.

Hanuman fell to the ground, where he lay very still. His father Vayu, who was flying over the earth, had a feeling that Hanuman was in danger. He rushed back to the valley of flowers and found his little son lying with his eyes closed.

“Who has done this to my son”? he called out from the sky.

The god of the winds was furious and blew great winds and storms around the world. Then, all of a sudden, the air become still.

“I will stop the air from flowing everywhere until my son Hanuman breathes again!”, said Vayu. Now this was very serious for the world. Plants, animals and people quickly began to feel weak, fall over and die. They did not have any air to breathe. When Indra, the god of thunder and lightning, flew by and saw what was happening, he felt very sad for the world.

“Anger is such a terrible thing”, he said. “None of this would have happened if I hadn’t got so cross. I must ask Vayu to forgive me”. Meanwhile Vayu had taken his son Hanuman deep under the ground and was cradling him in his arms. Indra called some other gods to beg Vayu to bring air back to the world. “Not until Hanuman breathes again”, replied Vayu.

So the gods promised to bring the monkey-boy back to life and said that when he grew up he would have more magic powers. He could grow as big or as small as he wished. His tail would be magic and he could fly high in the sky. He would lead an army of monkeys and even live as long as he liked!

“Fire will never touch him”, said the sun. Hanuman’s father was happy now and kept his word. The air moved agin and all the plants, animals and people came back to life.

“What happened to us?” they asked. They couldn’t remember anything!

Everything took place as the gods promised. Hanuman grew up to be the most fantastic monkey in the world. He lived in an enormous green forest. Sugreeva, the king of monkeys, heard about Hanuman’s special powers. He went to see him.

“Will you be my best friend and lead my army?” Sugreeva asked.

“Certainly”, said Hanuman, and from that day on the two were always together. 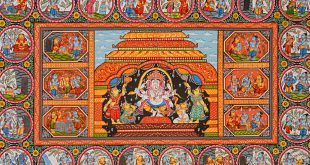