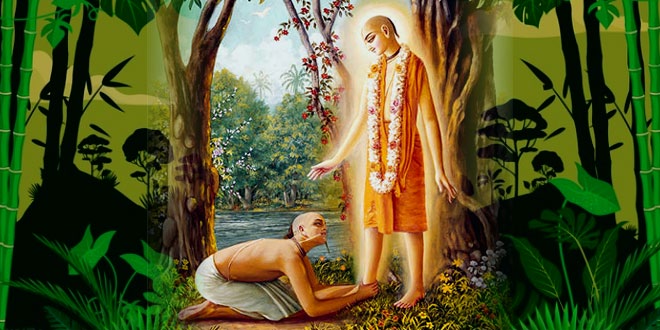 There once lived a seeker of God called Surdas. He was eager to study and understand Spirituality (knowledge about God). He approached a Guru and requested that the Guru teach him spiritual practice, so that he could get close to God.

The Guru was well aware of Surdas’ defect of anger. He knew that this would prevent Surdas from feeling closeness with God. So the Guru decided to first prepare Surdas before teaching him serious spiritual practice. So the Guru replied, “Dear Surdas, chant the God’s Name during all your activities, for a month. Then take a bath and come back to me.”

Starting the very next day, Surdas chanted the God’s Name during all his activities. After a month, he went to a river, took a bath and put on fresh clothes to visit the Guru. On the way to the Guru’s ashram (hermitage), his clothes got dirty as a sweeper was sweeping the street carelessly. Surdas was furious and shouted at the sweeper, “What you are doing, you fool? Now I have to go back, wash and dry these clothes and bathe again! Such waste of time!”

The Guru had observed the scene. When Surdas reached the ashram, He said, “Dear Surdas, you are not yet ready for further spiritual practice. Chant the God’s name during all your activities for another month, take a bath at the end of it and come to see me.”

Surdas accepted the Guru’s wish and went back to chanting along with his daily activities. When that month was over and Surdas was returning to the hermitage eagerly, a similar incident happened. This time, the sweeper accidentally brushed his dirty broom against Surdas. Again, Surdas became furious at the sweeper and again, the Guru sent him back and asked him to chant the God’s Name for another month.

At the end of the third month, when Surdas was on his way to visit the Guru, something unusual happened. The sweeper saw Surdas approaching and remembered the way Surdas had berated him even though what had happened had been an accident. He noticed that Surdas was once again wearing new, clean clothes. This time, before Surdas could do or say anything, the sweeper, who was furious at Surdas, intentionally poured all the dirt from his garbage can onto Surdas’ head.

But this time, Surdas joined his hands in Namaskar and said, “I thank you. You are my master. You taught me how to overcome anger.” The sweeper was surprised and hung his head in shame.

This time, when Surdas reached the Guru’s ashram, the Guru was waiting for him. The Guru was pleased and patted Surdas on the head, just as a mother pats a child on his achievement.

Moral of the story:

We can only imagine how irritated Surdas must have been with the sweeper, who would accidentally come in the way, when Surdas was eagerly returning to his Guru, after a whole month’s effort. In our lives, we come across many such situations that anger us. As the story above shows, Surdas completely overcame his anger after three months of chanting the God’s Name and by obeying the Guru. He viewed the sweeper as the master who helped him overcome his anger. We too can look at every situation as an opportunity to realize and overcome our defects. This is possible only due to the strength of chanting the God’s Name.