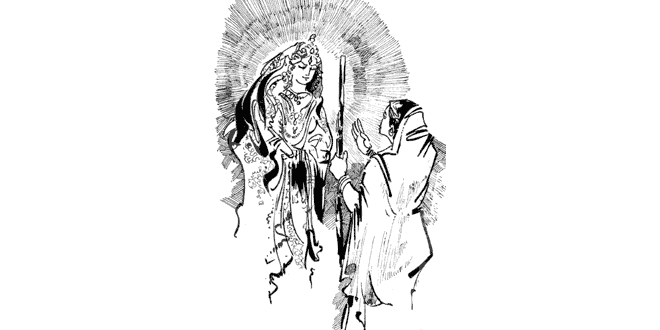 Long Long ago there was a king in Jaisalmer whose name was Rawal Prithvi Singh. His kingdom was very prosperous. He built up his capital with latticed windows and large havelis (palaces). He also captured some areas of neighboring kingdoms. But he was not broadminded. His success made him unreasonable, foolish and haughty.

One day, while he was in his durbar, a merchant came to him and showed him some valuable and precious jewels which he wanted to sell to the members of the royal family.

Rawal wanted to impress upon the merchant the extent of his richness. He brought the whole lot and ordered it to be thrown into a ditch. This was obviously a foolish and arrogant action, which annoyed Lakshmi, the Goddess of wealth. She took decision to teach the silly king a lesson. She made him take to gambling. As a result, Prithvi Singh lost all his wealth and kingdom and in sorrow, humiliation and despair, he along with his wife, left the kingdom.

With heavy heart, they walked on and on for many days till they reached Patan city (an ancient fortified city in Gujarat, was founded in 745 AD by Vanraj Chavda, the most prominent king of the Chavda Kingdom). They decided to stay there on the outskirts of the city and try their luck. Rohini, his wife, was a woman of great beauty and very religious minded. She could realize that all this trouble was on account of a divine curse. She was a devotee of lord Vishnu. To stave off her bad days, she started a series of fasts and pooja.

One day, after her pooja, she came out of her hut to worship the tulsi tree. Having done so, she was about to get in when she saw a dead snake. Soon after, a kite appeared. It was holding a necklace in its beak. As soon as the kite saw the dead snake, it dropped the necklace and picked up the snake and flew away. Rohini deemed it a boon from God. The necklace belonged to the queen of Patan. The kite picked it up as the queen was bathing at a pond. It was lying there with the clothes of the queen. As she came out of the pond, the queen could not make out how the necklace had disappeared. An announcement was made all around the city about the loss of the necklace and a handsome reward and simultaneously announced for a person who could get the necklace back. In the evening when Rawal Prithvi Singh went to the bazaar, he noticed a good deal of excitement and asked a passerby what its reason could be. He was told about the loss of the queen’s necklace and the reward that was to be given to one who could trace it. At night when he returned to his hut, he narrated the incident to his wife. When she heard this, Rohini’s joy knew no bounds. She, in return, narrated to him how the necklace came to her. In the morning, both husband and wife went to the palace and handed over the necklace to the queen. Rohini narrated to the queen how she got the necklace from the kite. The royal couple was very happy at the sight of the precious necklace and asked her what sort of reward she would like to have.

Rohini said, “I do not want money or land. All I say is that on Diwali night, no house in the whole city, including the palace, shall be lit with lamps. Those who want to light lamps may come to my hut and light them around it.”

The king and queen were very much surprised at this request. But her request was granted.

Soon after, Diwali came. There were no lights in the city except around Rohini’s cottage, of course, under the instruction of the king.

When at night, Goddess Lakshmi came to the city, she was shocked to find darkness all around. She could not enter any house.

At last she saw a lighted hut on the outskirts of the city and hurriedly proceed towards it. Rohini stood at the door with a big stick in her hand. She did not allow Lakshmi to get in, unless she promised to Rohini and her husband. Goddess Lakshmi gave her word. She also promised them to help them regain their lost kingdom.

After getting the promise from Lakshmi, Rohini smiled and allowed her into her cottage.

Lakshmi passed the whole night in the hut and blessed the couple.