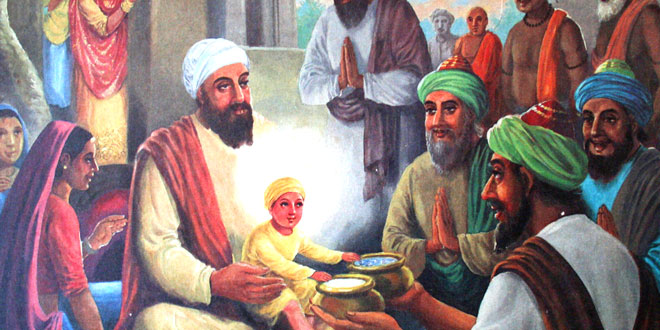 Early Life of Guru Gobind Singh: Guru Gobind Singh was born in December 1666 A.D. at Patna, present day capital of Bihar State. His parents, Guru Tegh Bahadur, and Mata Gujri, had gone to the East on long tour to preach teachings of Guru Nanak. Guru Tegh Bahadur, was accompanied by a large number of his devotees. The purpose of this prolonged tour was to spread the message of love, compassion and devotion.

On reaching Patna, Guru Tegh Bahadur made arrangements for his family to stay there and he proceeded further to tour Bengal & Assam. He was in Assam when his only son was born.

Guru Gobind Singh, who was the Tenth Guru of the Sikhs, was named Gobind Rai on birth by his mother, Mata Gujri Ji.

He lived in Patna for first five or six years of his early life. Even at that young age, he showed signs of leadership. He was always surrounded by many children and played war games with them. He had keen desire to play a soldier. He was always active and cheerful. He divided his army of playmates in two groups. He would take command of one group and deputed another boy to head the other group. Thus, they engaged themselves in mock battles and devised games and competition requiring courage, skill, energy and endurance. He was brave and fearless and all his willingly.

One day when he was playing with his playmates in a street of the city, they learnt that Nawab of Patna was coming there. The servants of Nawab told the boy to salute the Nawab. Gobind Rai told the boys that they would defy this order. He said, “Brothers, instead of saluting or saying Salam, we will jeer at him and make faces at him.” Thus when the Nawab appeared, all the boys made faces at him and clapped their hands in fun.

The servants of Nawab tried to catch them but they all ran away shouting and clapping.

Gobind Rai was charming boy, he was always loved by young old and rich people of his good conduct. He was equally liked by Hindus and Muslims. Among his Hindu admirers were a learned Bhramin Pandit Shiv Das, Raja Fateh Chand Maini and his wife. Among his Muslim admirers were two brothers, Nawab Rahim Baksh and Nawab Karim Baksh who gifted a village and Gardens to the promising child.

Pir Bhikham shah lived in village Thaska in District Karnal, which is now in Haryana. He was a Sayyid and on the day when Guru Gobind Rai was born at Patna, he made a deep and respectful bow towards East in direction of Patna. His Muslim disciples and village people were surprised and agitated because Muslim bow towards West, in direction of Mecca. They asked the Pir, the purpose of this strange act. Then Sayyid replied, “I bowed in respect towards Patna where a special person has been born. I have bowed to that saviour chosen by God”. He has taken birth to perform wonders to destroy evil, sin and falsehood. He will fight for the cause of virtue, and true religion. I will go to that sacred place to be blessed by seeing the holy child.” Pir Bhikham shah then left for Patna with his disciples and some servants.

On arrival at Patna, the Pir went to the house where Gobind Rai was born. After respectful bow, he sat down near the door of the house. When asked what he wanted and why he was sitting there, the Pir said, “I have come from a far off place to be blessed by having look at the holy child.” Mata Gujri when informed of the arrival of the Faqir and his intention, hesitatingly made some excuses but the Pir was adamant and implored that his wish to see the child be granted. He told that having traveled for many days covering hundreds of miles, he would not go away, neither eat nor drink till his wish was granted. The Pir was at last permitted to see the child.

On seeing the child, the Faqir respectfully made a deep bow and offered two earthen pots containing sweetmeats. The Pir had purchased one pot from Muslim shop while the other pot of sweets was purchased from a Hindu shop. After placing both the pots containing sweets before Gobind Rai, the Pir sat down with folded hands and looking at the child, shri Gobind Rai placed his left hand on one of the pots and at the same time placed his right hand on the other pot. The child then smiled and looked at the pir who made a long and deeper bow to the holy child.

The follower of Pir who had come with him, were also present and watching the child. They could not understand what their Sayyid wanted to derive by the episode. They requested the Pir to enlighten them. The Pir explained that he wanted to know whether this holy child will favor the Hindus or he will bestow his favor to the Musalmans. I had placed the pots of sweets before the child and said to myself that if the child will put his hand on the pot, I purchased from Hindu shop, he would favor the Hindus, on the other hand if the child placed his hand on the pot purchased from Muslim shop he will favor Muslims. He knew my mind and what I wanted to know. So, he placed his both hands on both the pots, there by telling that both Hindus as well as Muslims will be equally dear to him. He will help Hindus whenever they need his help and he will help Muslims whenever they are in need of his help. The Pir further said that he was immensely impressed and pleased with this act of the Holy child. The Pir along with his disciples and servants then returned to his home and remained great admirer of Guru Gobind Singh throughout his life.