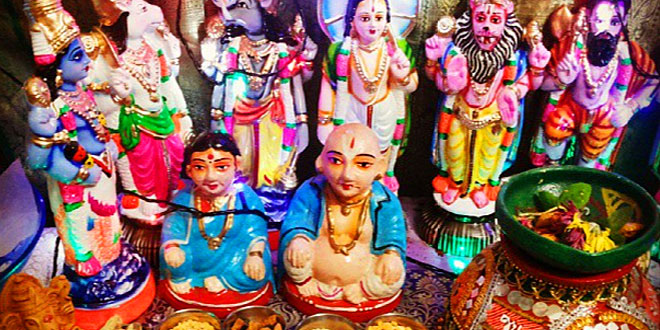 What are Pooja rituals done daily during Navratri? Navratri, the festival of nights, lasts for 9 days with three days each devoted to worship of Maa Durga, the Goddess of Valor, Maa Lakshmi, the Goddess of Wealth and Maa Saraswati, the Goddess of Knowledge. During the nine days of Navratri, feasting and fasting take precedence over all normal daily activities amongst the Hindus. Evenings give rise to the religious dances in order to worship Goddess Durga Maa.

On the first day of the Navratri, a small bed of mud is prepared in the puja room of the house and barley seeds are sown on it. On the tenth day, the shoots are about 3 – 5 inches in length. After the puja, these seedlings are pulled out and given to devotees as a blessing from god. These initial days are dedicated to Durga Maa, the Goddess of power and energy. Her various manifestations, Kumari, Parvati and Kali are all worshiped during these days. They represent the three different classes of womanhood that include the child, the young girl and the mature woman.

During these days, Lakshmi Maa, the Goddess of peace and prosperity is worshiped. On the fifth day which is known as Lalita Panchami, it is traditional, to gather and display all literature available in the house, light a lamp or ‘diya‘ to invoke Saraswati Maa, the Goddess of knowledge and art.

These final days belong to Saraswati Maa who is worshiped to acquire the spiritual knowledge. This in turn will free us from all earthly bondage. But on the 8th day of this colorful festival, yagna (holy fire) is performed. Ghee (clarified butter), kheer (rice pudding) and sesame seeds form the holy offering to Goddess Durga Maa.

The festival of Navratri culminates in Maha Navami. On this day Kanya Puja is performed. Nine young girls representing the nine forms of Goddess Durga are worshiped. Their feet are washed as a mark of respect for the Goddess and then they are offered new clothes as gifts by the worshiper. This ritual is performed in most parts of the country.

Previous What is Navratri Kolu or Navarathri Golu?
Next What are Navratri Customs?