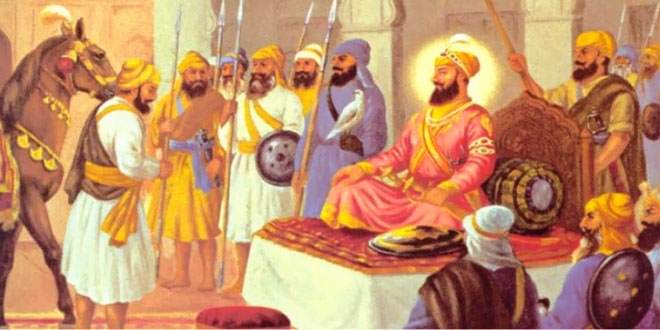 Guru Gobind Singh (22 December 1666 – 7 October 1708), born Gobind Rai, was the tenth Sikh Guru, a spiritual master, warrior, poet and philosopher. When his father, Guru Tegh Bahadur, was executed by Aurangzeb, Guru Gobind Singh was formally installed as the leader of the Sikhs at the age of nine, becoming the tenth and final human Sikh Guru. His four sons died during his lifetime – two in battle, two executed by the Mughal army.

Among his notable contributions to Sikhism are founding the Sikh warrior community called Khalsa in 1699 and introducing the Five Ks, the five articles of faith that Khalsa Sikhs wear at all times. Guru Gobind Singh is credited with the Dasam Granth whose hymns are a sacred part of Sikh prayers and Khalsa rituals. He is also credited as the one who finalized and enshrined the Guru Granth Sahib as Sikhism’s primary scripture and eternal Guru.

On a maiden day, in Patna,
beneath the radiant sun,
comes forth from the heavens,
a melody just once heard before.

The gods and angels await…
The universe in silence still,
From the will of God Almighty,
comes forth Justice, in splendid form.

The prayers of the saints, the terror stricken poor,
are heard by God, and justice served.
The house of Nanak, the womb of Mata Gujri,
comes forth a child, heavenly adorned…

Radiant is Thy nature,
sacrifice Thy personality,
justice is Thy sword,
God’s will Thy obey, in humility.

At nine did Thee send forth,
in a cause for suffering humanity.
Thy father unto his death,
to save Hinduism, from mortality.

Thou art like Guru Arjun Dev,
whom suffered tortures inhumane.
Who praised the Lord All Mighty,
uttering, while being tortured

“Sweet is Thy Will, Oh Lord,
I ask only for Thy Name”…
Who can Thou possibly be,
I know Thee as Guru Gobind Singh Ji…

Guru Gobind Singh Ji,
at the age of play,
Thou arose to the challenge,
not once did Thy fail.

Thou sacrificed all, the baby Princes
at a playful age of 6 and 8.
Thy teen aged Princes, martyred in battle,
for the cause of Sikhi, and freedom of religion.

Love, if ever its true meaning known,
who else be but Thee.
Justice, if ever the world were to learn,
no further then your courts does one have to see.

Guru Gobind Singh Ji,
none in the Three Worlds, can match sword with Thee.
Thy bow is magical, from which arrows of lightening flee.
Thy Eagle, Blue Stallion are themselves heavenly.

Guru Gobind Singh Ji,
Thou art Poetry,
which soothes the minds
of all Thy devotees.

Guru Gobind Singh Ji, may I forever,
be a sacrifice unto Thee.