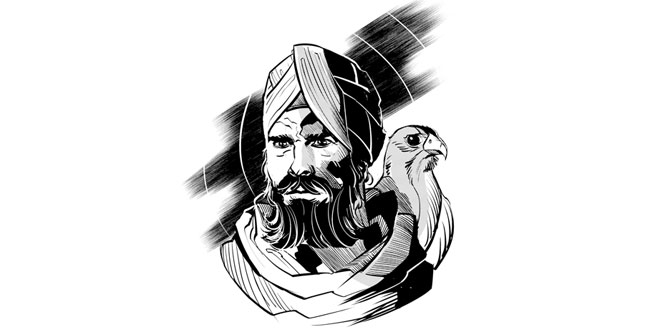 Guru Tegh Bahadur was the ninth of the ten Gurus of the religion of Sikhism. The youngest of the five sons of the sixth Sikh guru, Guru Hargobind, he was trained in the martial arts of swordsmanship and horse riding from a young age. He also received religious training from Baba Buddha and Bhai Gurdas.

He grew up to be a brave young man and accompanied his father and other Sikhs in their battles and displayed bravery in the wars against the Mughal forces. However, after one particularly bloody battle in 1634 at Kartarpur, he turned to the path of renunciation and meditation. Meanwhile his father selected Har Rai, his grandson as his natural successor, who became the seventh guru of the Sikhs. Har Rai himself was succeeded by his son Har Krishan.

In March 1664 Guru Har Krishan contracted smallpox and just before his death he informed the followers that his successor would be found in Bakala. Following some mystical events Tegh Bahadur was recognized as the successor and appointed the Sikh guru. As the guru he toured various parts of India and composed several hymns. He believed in religious freedom for all, and this brought him in conflict with Mughal Emperor Aurangzeb who ordered that the guru be brutally executed.

Guru Tegh Bahadur was born as Tyag Mal on 1 April 1621 in Amritsar, India, to the sixth Sikh guru, Guru Hargobind and Mata Nanaki. He had one elder sister and four brothers.

From a young age he was trained in the martial-arts of archery and horsemanship. He also received religious training from Baba Buddha and Bhai Gurdas. He grew up to be a brave young man and displayed considerable courage in the battles against the Mughals in which the Sikhs were often engaged in. His father gave him the title of “Tegh Bahadur”, meaning “Mighty of Sword”, in recognition of his bravery.

In 1634, the Sikhs fought a particularly brutal and bloody battle at Kartarpur. Following this battle, a major change came over the young man Tegh Bahadur and he turned to the path of renunciation and meditation. He eventually moved to the isolated village of Bakala and spent several years in contemplation and prayer.

Guru Tegh Bahadur is revered for the supreme sacrifice he gave to protect the religious rights of the Hindus.

He is known as Hind-di-Chaadar (shield of India) for resisting the forced conversions of Hindus in Kashmir to Islam. By giving up his life for the rights of the Hindus, he became the first person in history to sacrifice his life to save the freedom of another religion.

Tegh Bahadur was married on 3 February 1633, to Mata Gujri.

He was succeeded by his son Gobind Rai who assumed the Guru Gaddi as Guru Gobind Singh upon Guru Tegh Bahadur’s death.

On his Shaheedi Diwas, I bow to the great Sri Guru Tegh Bahadur Ji and recall his vision for a just and inclusive society.