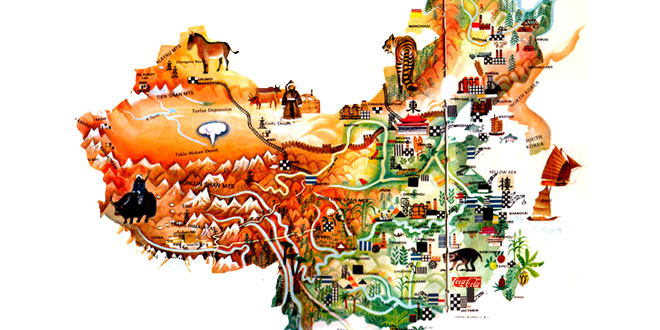 The interior of China is extremely mountainous. Many of the ranges follow a west-east direction and, to the east, the altitude decreases and the mountains merge into rolling hills and lowlands. In the far west is the Pamir Range, known as the ‘roof of the world.’ From the Pamirs, three main mountain systems extend eastwards. The Tien Shan and Altay ranges follow the northern border. The central part of western China is dissected by the vast Kunlun Shan, while the lofty Karakoram and Himalayan ranges rise in the south. Between the Kunlun Shan and the Himalayas is the bleak Tibetan Plateau, which is around 4,000 meters above sea level. This windswept region is four items as large as France. Lower mountain ranges fringe the south-eastern coast of China.

The largest lowland is the Great China Plain in the east. This is the most fertile and also the most densely populated part of the whole country. Most Chinese rivers drains into the Pacific. China has numerous lakes. Freshwater lakes are mostly found along the rivers in the eastern part of the country, while salt lakes abound in areas of inland drainage.

Hot and cold deserts cover more than half of the total area of China. Forests make up about 15 per cent, pasture about 20 per cent, and arable land only 13 per cent. However, because of favorable climatic conditions, two or three harvests are possible every year in some areas.

In 1980 agriculture, forestry and fishing employed 69 per cent of the work, as compared with 19 per cent in industry. By far the most important crop is rice, of which China is the world’s largest producer. The country is also a major world producer of barley, cotton, groundnuts, jute, maize, millet, pears, pineapples, potatoes, soya beans, tea, tobacco and wheat. Other leading farm products include hemp, sesame, sugar beet and sugar cane, as well as many other items. Pigs are the leading farm animals and China has nearly 40 per cent of the world’s pigs. Also important are the 109 million sheep, 55 million cattle, 78 million sheep, 55 million cattle, 78 million goats and great numbers of water buffaloes and poultry. Mountain farmers use yaks as beasts of burden, while desert peoples use camels. Sericulture (the cultivation of silk worms for silk production), fishing and forestry are all major activities. China has both softwood and hardwoods forests.

In 1982 industry contributed 41 per cent of the gross domestic product, as compared with 37 per cent from agriculture. China is extremely rich in mineral deposits, although many deposits have yet to be worked commercially. Minerals include antimony, bauxite, coal, cobalt, copper, gold, mercury, oil and natural gas, silver, tin the world’s largest deposits of tungsten, uranium and so on.

Manufactured products include building materials, cement, iron and steel, aluminium, harvesters, tractors and other farm machinery, railway rolling stock, lorries, machine tools and many other engineering products. There is a large food-processing industry and Chinese silk, glass, porcelain and textiles are world famous.

The transport system still lags behind the country’s needs, and by far the largest proportion of freight is hauled by rail and inland shipping. However, new roads are being built to connect the outlying and underdeveloped parts of the interior with the more developed areas in the east.

Previous और रंग मुस्कुरा दिए: मंजरी शुक्ला
Next What is the history of Chinese New Year?