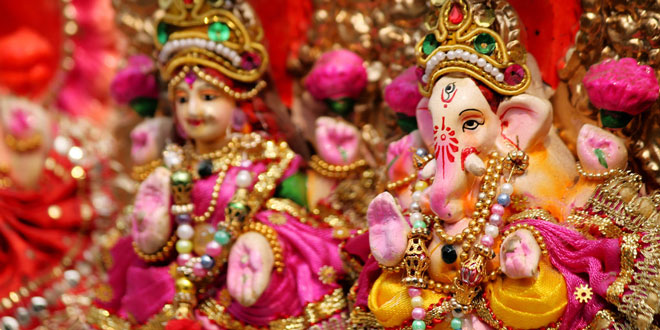 Diwali Festival History: The festival of Diwali is celebrated by Indians throughout the world in a joyous mood, with zeal and enthusiasm. The festival is predominated by colorful display of lights, bursting of crackers, cleanliness, sweets, lots of shopping, happiness. The festive spirit brings people of different communities closer, to celebrate the vibrant festival in the most blissful and lively way. Like most of the festivals in India, Diwali too has its base in mythology and there is a very interesting history about this festival. Go through the following lines to get information on the history of Diwali.

The first day of Diwali celebration is marked by Dhanteras. According to the legends, during the churning of ocean by the Gods and the demons, Dhanvantari – the physician of the Gods came out of the ocean on the day of Dhanteras, with a pot of amrita that was meant for the welfare of the humankind. This day also marks the arrival of Goddess Lakshmi, which is celebrated by drawing small footprints of the deity, with rice flour and vermilion powder.

One famous story behind the celebrations of Diwali is about the demon king Narakasur, who was ruler of Pragjyotishpur, a province to the South of Nepal. During a war, he defeated Lord Indra and snatched away the magnificent earrings of Mother Goddess Aditi, who was not only the ruler of Suraloka, but also a relative of Lord Krishna’s wife – Satyabhama. Narakasur also imprisoned sixteen thousand daughters of Gods and saints in his harem. A day before Diwali, Lord Krishna killed Narakasur, released the jailed daughters and restored the precious earrings of Mother Goddess Aditi.

Diwali And Shri Ram of Ayodhyaa

The most famous legend behind the celebrations of Diwali is about the prince of Ayodhya Nagri – Lord Shri Ram. According to the legend, the king of Lanka, Ravan, kidnapped Lord Ram’s wife (Sita) from the jungle, where they were staying as per the instructions of King Dashratha, father of Lord Ram. Then Ram attacked Lanka, killed Ravan and released Sita from the custody. He returned to Ayodhya with his wife Sita and younger brother Lakshamana after fourteen years.

Therefore, the people of Ayodhyaa decorated their homes as well as Ayodhyaa, by lighting tiny diyas, in order to welcome their beloved prince Shri Ram and Devi Sita. It was the day of ‘Kartik Amavasyaa’ when they also celebrated the victory of Shri Ram over the King of Lanka, Ravan. Ram is considered the symbol of good and the positive things and Ravan represents the evils. Therefore, Diwali is considered the festival, which establishes the victory of good over the evil. On the night of Diwali, people light diyas, which is again an icon of positive energy to conquer darkness, the is symbol of negative energy.

‘Govardhan‘ is a small hillock situated at ‘Braj’, near Mathura. The legends in ‘Vishnu Puraan’ have it that the people of Gokul used to worship and offer prayers to Lord Indra for the rains, because they believed that it were He, who was responsible for rainfall for their welfare. However, Lord Krishna told them that it was Mount Govardhan (Govardhan Paevat) and not Lord Indra, who caused rains. Therefore, they should worship the former and not the latter.

People did the same, which made Lord Indra so furious that the people of Gokul had to face heavy rainfall because of his anger. Lord Krishna came forward to ensure their security and after performing worship and offering prayers to Mount Govardhan, he lifted it as an umbrella, on the little finger of his right hand, so that everyone could take shelter under it. After this event, Lord Krishna was also known as Giridhari or Govardhandhari.

According to the legends, Lord Yamraj, the God of Death, visited his sister Yamuna on the ‘Shukla Paksha Dwitiya’ day in the Hindi month of ‘Kartik’. When Yamraj reached Yamuna’s home, she welcomed him by performing his aarti, applying ‘Tilak’ on his forehead and by putting a garland around his neck. Yamuna also cooked varieties of dishes, prepared many sweets for her brother and offered all those to Him.

Lord Yamraj ate all those delicious dishes and when he was finished, he showered blessings on Yamuna and gave her a boon that if a brother visits his sister on this day, he would be blessed with health and wealth. This is why this day of Bhayya Duj is also known by the name of ‘Yam-Dwitiya’. Thus, it has become a tradition that on the day of Bhai-Dooj for the brothers to visit their sisters’ home and offer them gifts. Sisters also make various dishes for their brothers and give gifts to them.

In the Sikh community, Diwali celebrations have special importance as for them it, is popular as the day when their sixth Guru, Guru Har Gobind ji came back from the captivity of the fort of Gwalior city. The people illuminated lamps in the way to Shri Harmandhir Sahib, which is known by the name of ‘the Golden Temple’, to honor and welcome their beloved Guru.