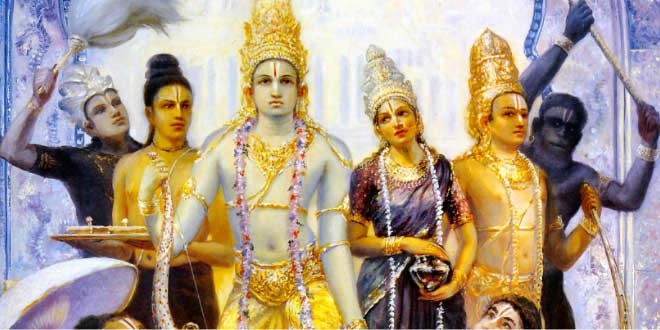 Rama Navami (Ramanavami) the birthday of Lord Rama is a major Hindu festival celebrated all over the country by devout Hindus both Vaishnavas and Shaivas. Rama, the seventh incarnation of Vishnu was born on the ninth day of the bright half of the Chaitra (March – April) in Ayodhya (Uttar Pradesh, India), in the Treta Yuga, the Second Age. There is one God, Desireless, Formless, Uncreated, True Being, Consciousness and Bliss, the Supreme Spirit, the all pervading, whose shadow is the world; who incarnates himself as Rama or Krishna and does many things, only for the love that he bears to his devotees; who in his mercy ever refrains from anger against those whom he loves and knows to be his own. Adi Kavi Balmiki in his celebrated Ramayana describes the advent of Rama thus:

“Then after the expiry of six seasons and on the completion of the twelfth month, on the ninth lunar day of the month of chaitra under the star Punarvasu, with the Sun, Mars, Saturn, Jupiter and Venus at Aries, Capricorn, Libra, Cancer and Pisces, and when the moon with Jupiter entered Cancer of the Zodiac, Kaushalya gave birth to great and prosperous Rama with mighty arms, rosy eyes and scarlet lips, the joy of Dashratha and the adored of all people. He bore all auspicious marks on his fair body.”

The Ramayana means the “Ways of Rama”. It is held in the greatest possible reverence because it embodies the best of human ideals and a living sum of Indian character. As a popular religious epic and great literary work nothing can inspire and enthuse us more than the Ramayana. A verse in the end of Ramcharitra Manas reads:

“There is no age to compare the Age of Iron (Kaliyuga; in it, if a man has only faith and devotes himself to praising Ram’s spotless virtues, he escapes from the sea of birth and death without further trouble. Religion has been revealed with four feet; in the iron Age one is of the most importance; to whomsoever God has given let him practice alms giving and prosper.”

A fair idea of Ramayana’s immense popularity can be had from the fact that there are about 350 visions of it in Hindi alone, and the name of Rama, as “Rama! Rama!” or “Jai Ramji Ki!”, is common form of salutation among the masses.

The Ramanavami festival offers to us all an opportunity to imbibe at least some of the ideas and spirit enshrined in the ways of Rama. On this great day Lord Rama is prayed to and worshiped, and it is the surest means to be able to follow in his ideals. One who approaches his lotus feet with love devotion and humility becomes noble, large hearted, pious, peaceful, master of senses and beloved of the wise. On this scared day you should observe fast and practice charities. You should visit a temple of Rama early in the morning after bath etc. You can also make a small shrine at home and install a picture of Sri Rama-Panchayatan in it and offer prayers and puja.

In Ayodhya, the birth place of Sri Rama, great celebrations are there; the temples are decorated, Ramayana is read and recited and a grand fair is held. At other places also icons of Rama, along with Sita and Hanuman is richly adorned and worshiped and other acts of devotion and piety are observed. Chanting of holy name of Rama, Sanskritanas and holding of lectures and discourses on Rama’s life and teachings, for the benefit of audience, are common features of the celebrations. People take vow to devote themselves more to their spiritual and moral evolution on this occasion. Really, Rama-nam is a great magic formula (mantra) and a wish-fulfilling tree (Kalpa vriksha), and must be repeated, recited and meditated upon every now and then. Tulsidas has said that place the name of Rama on your tongue, like a jewelled lamp on the threshold of the door, and there will be light, as you will, both inside and out.

Rama Navami is also celebrated as the Vasanta Navratra and the celebration starts from the first lunar day of the bright fortnight of Chaitra and last upto Rama Navami. On Ashtami Durga is worshiped. A fast is observed all the nine days and Durga-saptsati is read and an earthen pitcher filled with water is installed. Some fast only on the first and the last day of the period. Rama and Lakshmana had also performed worship to mother Durga before killing Ravana. If you wish to achieve anything worthwhile, seek the Mother’s grace and it is a proper occasion. Ram and Devi, both symbolize the victory of good over the evil.

Previous When is Ram Navami or birthday of Lord Rama celebrated?
Next Rama Navami Pooja Vidhi in Hindus