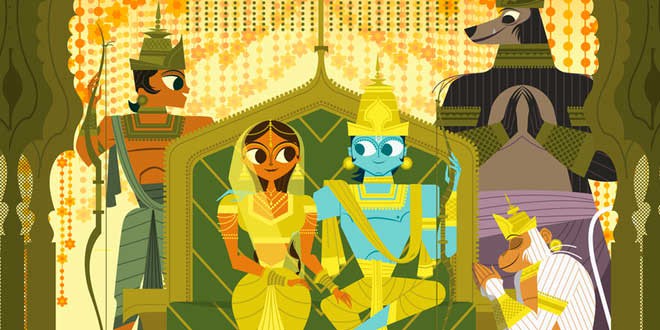 Ramayana 2: Ram Navami Quiz For Students – Everyone knows about Lord Rama and the epic Ramayana. We have read about these in books and seen on television. Below is the 10 question simple quiz to check your remembrance. It’s a simple quiz related to incidents and personalities involved in the life of Lord Rama.
Get Started!

Ramayana is one of the two major Sanskrit epics of ancient India, the other being the Mahabharata. Along with the Mahabharata, it forms the Hindu Itihasa.

The epic, traditionally ascribed to the Hindu Valmiki, narrates the life of Rama, the legendary prince of the Kosala Kingdom. It follows his fourteen-year exile to the forest from the kingdom, by his father King Dasharatha, on request of his second wife Kaikeyi. His travels across forests in India with his wife Sita and brother Lakshmana, the kidnapping of his wife by Ravana, the great king of Lanka, resulting in a war with him, and Rama’s eventual return to Ayodhya to be crowned king.

There have been many attempts to unravel the epic’s historical growth and compositional layers; various recent scholars’ estimates for the earliest stage of the text range from the 7th to 4th centuries BCE, with later stages extending up to the 3rd century CE.

The Ramayana is one of the largest ancient epics in world literature. It consists of nearly 24,000 verses (mostly set in the Shloka meter), divided into seven Kandas and about 500 sargas (chapters). In Hindu tradition, it is considered to be the adi-kavya (first poem). It depicts the duties of relationships, portraying ideal characters like the ideal father, the ideal servant, the ideal brother, the ideal husband and the ideal king. Ramayana was an important influence on later Sanskrit poetry and Hindu life and culture. Like Mahabharata, Ramayana is not just a story: it presents the teachings of ancient Hindu sages in narrative allegory, interspersing philosophical and ethical elements. The characters Rama, Sita, Lakshmana, Bharata, Hanuman, Shatrughna, and Ravana are all fundamental to the cultural consciousness of India, Nepal, Sri Lanka, and south-east Asian countries such as Thailand, Cambodia, Malaysia, and Indonesia.

There are many versions of Ramayana in Indian languages, besides Buddhist, Sikh, and Jain adaptations. There are also Cambodian, Indonesian, Filipino, Thai, Lao, Burmese, and Malaysian versions of the tale.