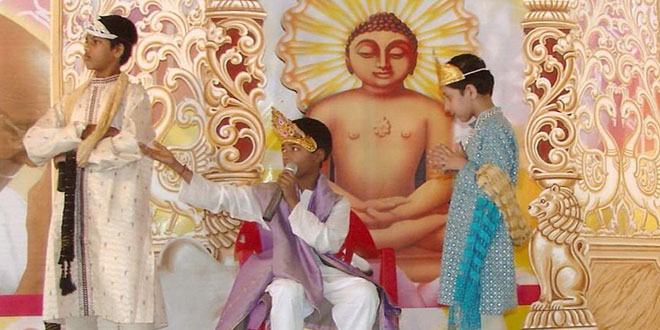 Born to King Siddharth and Queen Trisala of Vaisali (now in the state of Bihar, India), the Mahavira was named Vardhaman, as his father’s kingdom and fame grew right from the time he was conceived. Like his contemporary, Gautam Buddha, Vardhaman renounced the world and his princely status, and began to live like an ascetic. By the time he was 30 years old, he had already been named the Mahavira (supremely brave) for acts of valor performed during his youth. The Mahavira taught ahimsa (non-violence) and love for all living beings. Kings and queens were among those who became his followers. After he attained enlightenment, the Mahavira was named Jina (victorious over karma), and his followers, Jains.

The Mahavira renounced worldly life at the age of 30 and undertook austere penance till he achieved realization. Not satisfied with keeping the knowledge of the highest good to himself, he spread the message of salvation to the world. Thus started the faith of the Jinas or victors of the soul. The Mahavira, however, is the last in a line of tirthankaras or ‘bridge builders’, the first being Lord Rishabh. There is evidence at Harappa to prove that the religion propagated by Lord Mahavira dates back to pre-Vedic times. It is also mentioned in the Rig Veda.

To the Jains, the Mahavira is the last of a line of 24 teachers known as tirthankaras. And Mahavira Jayanti is a day to remember and worship this teacher and all his predecessors.