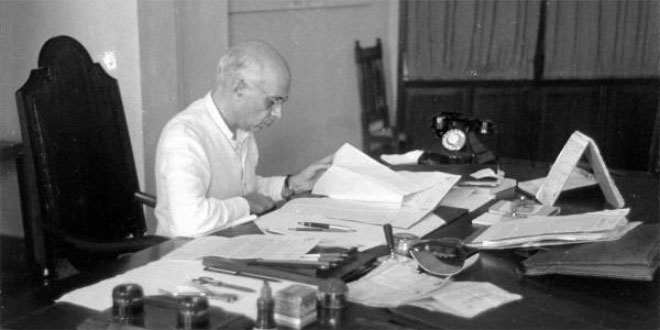 Who was Jawaharlal Nehru?

Jawaharlal Nehru (1889-1964), was the father of the Republic of India. He came from an upper class family and studied in England before returning to India in 1912. He became a close associate of Gandhi in the National Congress party which was devoted to gaining independence from Britain.

Pandit (a title meaning ‘learned man’) Nehru, however, believed that socialism and industrialization should be India’s aims rather than the rural programme of Gandhi. Nehru was prime minster of India from independence in 1947 until his death. He was a world statesman and leader of the non-aligned nations (not closely linked to the Soviet Union or the USA), who was loved in his own country and respected throughout the world. His daughter, Mrs. Gandhi, was to fill her father’s position after his death.

Jawaharlal Nehru had an inherent interest in the Indian politics. His father, Motilal Nehru, a lawyer by profession, was also a veteran congressman. However, unlike his father, Jawaharlal Nehru felt the pain of the common people of India. He fought for the freedom of the country selflessly.

Nehru felt dejected owing to the fact that though his father was involved in India’s freedom struggle he did not understand the ground realities of the people living in his country. Nehru’s dream of freeing the country from the clutches of the British got direction when he came across Mahatma Gandhi. He followed the Gandhian ideologies and realised that Satyagrah was the right path to attain freedom.

He was quite impressed by the way Mahatma Gandhi led various movements in the most peaceful manner and yet created an impact on the British. He joined several freedom movements led by Mahatma Gandhi.