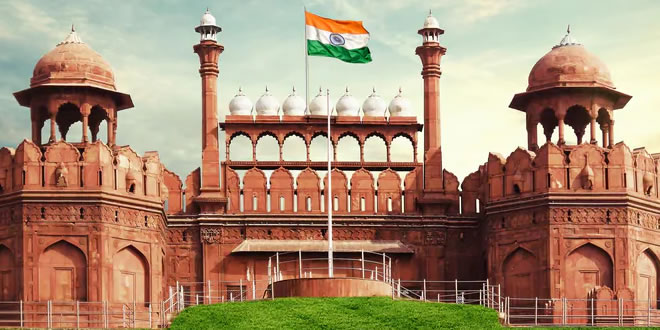 Here are some of the key differences:

Independence Day is observed as India became independent of British rule on 15th August 1947 after the Indian Independence Act was passed. It coincided with the partition of India on religious lines and a new country Pakistan came into existence. Republic Day is celebrated to commemorate the date on which the Constitution of India came into effect on 26th Republic, 1950. The Constitution was adopted by the Indian Constituent Assembly on 26 November 1949 and came into effect on 26 January 1950 with a democratic government system.

Positioning of the National Flag on the pole

When the Tricolour is to be ‘hoisted’ on Independence Day, i.e. August 15, the flag is tied and sits at the bottom of the pole. The Prime Minister of the country raises the flag up and hoists it with the aim to honour the historical event of the day.

On the other hand, when the Tricolour is to be ‘unfurled’ on Republic Day, i.e. January 26, the flag remains closed and tied up at the top of the pole. The President of India unfurls it without pulling it up like it is done on Independence Day. The difference between the two ceremonies is because when India became Republic, it was already independent.

Who hoists or unfurls the Tricolour?

Prime Minister is the head of the government. He ‘hoists’ the flag on Independence Day. On the other hand, the President of India ‘unfurls’ the Tricolour on Republic Day as the constitutional head and first citizen of the country.

Location of the celebrations

On Independence Day, the Prime Minister of India hoists the flag at the Red Fort in New Delhi. On the other hand, the Republic Day ceremony of unfurling the flag by the President of India takes place at Rajpath in the national capital.

Activities on the two events

On Independence Day, a flag hoisting ceremony takes place, followed by Prime Minister’s address. There are some cultural performances by the children on the same day, but those have been restricted due to the Covid-19 pandemic since last year.

On Republic Day, a flag unfurling ceremony takes place, followed by a parade that includes a march by the Indian Army, Indian Navy, Indian Air Force, and Police Departments, along with the tableau of all the states and Union Territories take place. Cultural performances by children are also included in the ceremony.