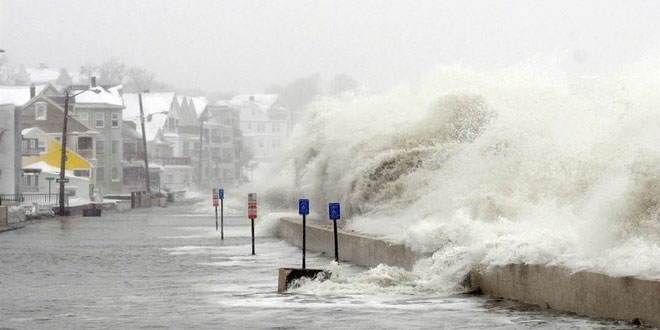 When will the Oceans of the Earth Overflow? Try this out. Plug the sink and leave the water running. It will lead to a flood in the bathroom and a scolding for letting the water overflow. Since the sink could not hold an unlimited amount of water, it let the water spill out.

But even the oceans are enormous bodies of water that get flooded with water from rain, melting ice, and rivers year after year. Will they start overflowing too? If so, when? And, where will they go?

The answer is, never. Despite the deluge of water, our oceans will never overflow.

The reason lies in the earth’s water circulation system, also known as the hydrologic cycle.

Earth is known as “the water planet“. Seventy percent of its surface is made up of water – it amounts to a staggering 1.36 billion metric tones. It covers an area that is nine times larger than the Moon’s surface. But this water is neither added to, nor subtracted from the planet for the simple reason that it is in constant motion, cycling through the oceans, the air, the land, and back to the oceans again.

The oceans contain the bulk of earth’s water – 97.2 percent. Ice caps and glaciers, ground water, atmosphere, rivers, lakes and marshes together make up less than three percent of the earth’s water

The cycle begins as the sun makes the water evaporate from oceans, lakes, rivers and soil. Transpiration releases more water vapour in the air. Transpiration is the process by which plants extract water from the ground and release it through their leaves. The vapour then condenses as rain or snow, 75 per cent of which falls on the oceans. The remainder pours on the land, river and lakes as rain. Some of the water then seeps into the earth as groundwater, while some is returned to the sea.

So, that is why the oceans are never in danger of overflowing.

Previous Kuriyan Jawan Bapu Pareshaan: 2021 Punjabi Comedy Film
Next What was the first life on the Earth?