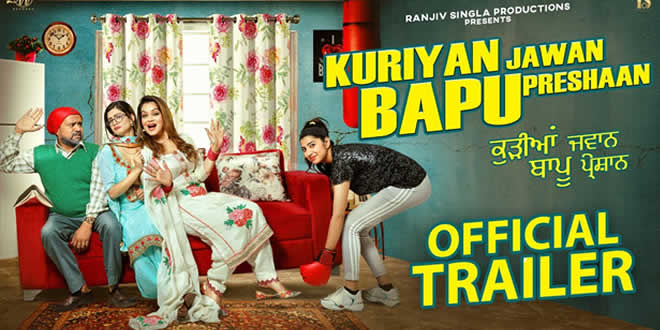 Kuriyan Jawan Bapu Preshaan is a Punjabi film based on a person, who is surrounded by people, who always diverts father’s thoughts, to doubt on his own daughter. But daughters prove everyone wrong and show that girls are not less than anyone. The Story depicts a father and his daughter challenging gender inequality plaguing their society in Indian drama.

A dry spell of more than a year in Punjabi cinema, last being Chal Mera Putt 2 which released a week before the lockdown on March 13, 2020, the first movie this year, Kuriyan Jawan Bapu Pareshaan, ticks all the boxes – drama, comedy, and a social message. Keeping it relevant to the Covid times, only it has two social advisories, wear mask and the other one that contradicts the film’s title – equal treatment for girl child.

From one narrator to another, this time the dhobi’s son, played by Anmol Sidhu, who also happens to be the writer of the film, the story picks pace from the moment he puts a mask alongside his father’s portrait saying, ‘had he used it, he would have been alive’. One more takeaway for the viewers!

Karamjit is convincing as the father of three young daughters. The movie also puts across a point about worrying fathers who put restrictions for daughters not because they have trust issues but because they feel the world is a bad place for girls. Gurnam Bhullar, Kamal Khan, Arvee and Talbi have sung three songs in the film which take the story forward. Although a predictable storyline, the movie leaves you in splits with the narrator’s Hindi and Punjabi mixed dialogues. Lastly, it scores well on the count of the realistic portrayal of troubles a girl child goes through. One-time watch as it’s an honest attempt to bring out the reality, only the title should have been positive like the movie!

Previous Who was the guru of Lord Rama?
Next When will Oceans of the Earth Overflow?