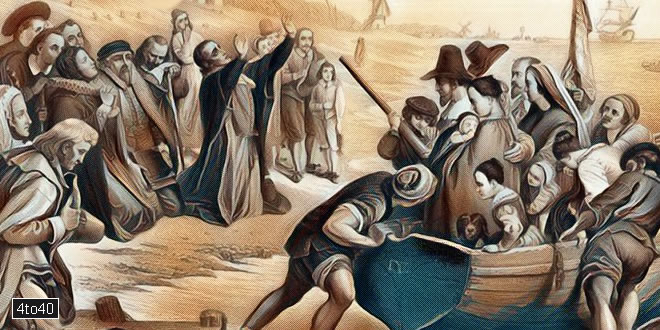 Who were the Pilgrim Fathers? In Tudor times a number of Puritans lived in Lincolnshire in England, where they were often badly treated because of their faith. At last they could stand the situation no longer. They decided to sail for Holland where other Puritans had already settled. Living in Amsterdam to start with, they moved to Leyden where they were warmly received by the friendly Dutch.

They never forgot that they were English, however, and finally came to a great decision. They would sail to England’s settlement in North America where they would have freedom to worship as they wished. About thirty-five of them arrived in England and with sixty-seven others – men, women and children – they sailed from Plymouth in 1620 in the Mayflower. After a voyage of two months during which the ship was blown off course, they anchored in Cape Cod Bay, Massachusetts. They had hoped to settle in Virginia but their captain would not take them further. Some of the men went ashore to search of a suitable place for a settlement and found one with plenty of wood and water. They named it Plymouth because that city had been their last link with the Old World. Their first winter was a hard one and by the spring of 1621 half of them had died. Even so, none wanted to return to England. Things slowly improved, especially when they made friends with their Indian neighbours. Other people joined them from England and the colony set an example of faith and courage to all future settlers who, in time, were to become Americans.