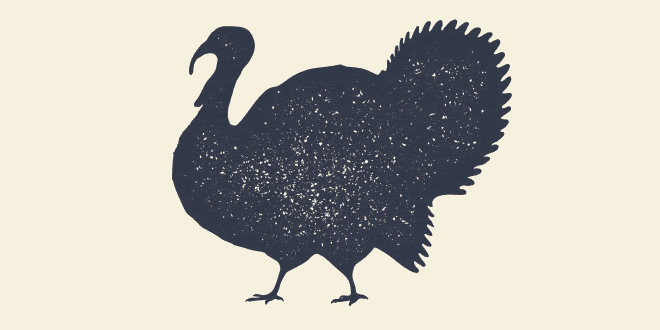 Why do we eat turkey for Thanksgiving? Although juicy and tender butterball turkeys are the main cuisine of today’s Thanksgiving celebrations, these birds were NOT the most popular centerpieces on the first Thanksgiving tables.

In 1621 when the Plymouth* colonists and Wampanoag Indians celebrated the first Thanksgiving, they were gobbling up many more foods than just turkey. Since lobster, goose, duck, seal, eel, and cod were plentiful during this time, these foods were most likely the main courses of this first feast. Deer meat and wild fowl are the only two items that historians know for sure were menu of this autumn celebration.

Plymouth (historically known as Plimouth and Plimoth) is a town in Plymouth County, Massachusetts. The town holds a place of great prominence in American history, folklore, and culture, and is known as “America‘s Hometown.” Plymouth was the site of the colony founded in 1620 by the Mayflower Pilgrims, where New England was first established.

So how did the turkey become the main mascot of modern-day Thanksgiving if we don’t know for certain that turkeys were at this first feast?

One story tells of how Queen Elizabeth of 16th century England was chowing down on roast goose during a harvest festival. When news was delivered to her that the Spanish Armada had sunk on it way to attack her beloved England, the queen was so pleased that she order a second goose to celebrate the great news. Thus, the goose became the favorite bird at harvest time in England. When the Pilgrims arrived in America from England, roasted turkey replaced roasted goose as the main cuisine because wild turkeys were more abundant and easier to find than geese.