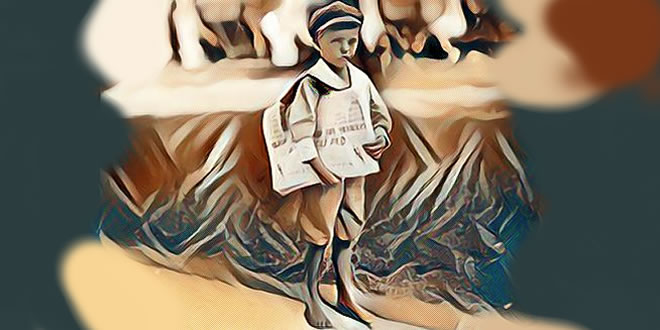 Bert’s Thanksgiving: Thanksgiving Short Stories – At noon on a dreary November day, a lonesome little fellow stood at the door of a cheap restaurant in Boston, and offered a solitary copy of a morning paper for sale to the people passing. But there were really not many people passing, for it was Thanksgiving Day, and the shops were closed, and everybody who had a home to go to, and a dinner to eat, seemed to have gone home.

An old man, with a face that looked pinched, and who was dressed in a seedy black coat, stopped at the same doorway, and, with one hand on the latch, he appeared to hesitate between hunger and a sense of poverty, before going in. It was possible, however, that he was considering whether he could afford himself the indulgence of a morning paper, seeing it was Thanksgiving Day; so at least Bert thought, and addressed him accordingly.

“Buy a paper, sir? All about the fire in East Boston, and arrest of burglars in Springfield. Only two cents.”

The little old man looked at the boy, with keen gray eyes which seemed to light up the pinched look of his face, and answered in a shrill voice, “You ought to come down in your price, this time of day. You can’t expect to sell a morning paper at 12 o’clock for full price.”

“Cold,” replied Bert, “I’m nearly froze. And I want my dinner. And I’m going to have a big dinner, too, seeing it’s Thanksgiving Day.”

“It’s more lonesome not to eat at all,” said the old man, his gray eyes twinkling. “Here, I guess I can find one cent for you – though there’s nothing in the paper, I know.”

The old man spoke with some feeling, his fingers trembled, and somehow he dropped two cents instead of one into Bert’s hand.” Here! You’ve made a mistake!” cried Bert. “A bargain’s a bargain. You’ve given me a cent too much!”

“But – see here!” And Bert showed the two cents, offering to return one.

Bert had instinctively pocketed the pennies, but he felt bad. “Poor old man!” he thought; “he’s seen better days, I guess. Perhaps he’s no home. A boy like me can stand it, but I guess it must be hard for him. He meant to give me two cents the whole time; and I don’t believe he has had a decent dinner for many a day.”

“Look here,” he cried; “where are you going to get your dinner, to-day?”

“I can get a bite here as well as anywhere – it don’t matter much to me,” replied the old man.

“I’ll pay for your dinner!” Bert exclaimed. “Come! We don’t have a Thanksgiving but once a year, and a fellow wants a good time then.”

“Ah!” said the man, taking off his hat and giving it a brush with his elbow as they entered the restaurant, as if trying to appear as respectable as he could. He placed his hat on the floor, and took a seat opposite Bert at a little table which they had all to themselves. Bert offered him the menu.

“I must ask you to choose for me; nothing very extravagant, you know I am used to plain food.”

“So am I. But I’m going to have a dinner, for once in my life, and so are you,” cried Bert, generously. “What do you say to chicken soup – and end up with a big piece of pumpkin pie! How’s that for a Thanksgiving dinner?”

“Scrumptuous!” said the old man, appearing to glow with the warmth of the room and the prospect of a good dinner. “But won’t it cost you too much?”

“Too much? No, sir!” said Bert. “Chicken soup, fifteen cents; pie – they give tremendous big pieces here, thick, I tell youten cents. That’s twenty-five cents; half a dollar for two. Of course, I don’t do eat this way every day of the year! Here! Waiter!” And Bert gave his princely order as if he did it every day.

“Where is your mother? Why don’t you have dinner with her?” the little man asked.

Bert’s face grew sober in a moment. “That’s the question! Why don’t I? I’ll tell you why I don’t. I’ve got the best mother in the world! What I want more than anything is to be with my mother and my two sisters again, and I am not ashamed to say so. “Bert’s eyes grew very tender, and he went on; while his companion across the table watched him with a very gentle, searching look. “I haven’t been with her now for two years – hardly at all since father died. Mom couldn’t support my sisters and so I said, I’m a boy; I can do something to help. I’ll go to work, and maybe help you a little, besides taking care of myself.”

“What could you do?” said the little old man.

“That’s it; I was only eleven years old; and what could I do? So I started selling newspapers. I’ve sold newspapers ever since, and I shall be twelve years old next month.”

“It’s okay to help make my own living,” replied Bert, proudly. “But what I want is, to learn some trade, or regular business, and settle down and make a home for my mother. But there’s no use talking about that.” “Well I’ve told you about myself,” added Bert; “now suppose you tell me something?”

“Yes. I think that would go pretty well with the pie.”

But the man shook his head. “Life isn’t what we think it will be, when we are young. You’ll find that out soon enough. I am all alone in the world now; and I am nearly seventy years old.”

“It must be so lonely, at your age! What do you do for a living?”

“I have a little place in Devonshire Street. My name is Mr. Crooker. You’ll find me up two flights of stairs, back room at the right. Come and see me, and I’ll tell you all about my business and perhaps help you get a better job, for I know several business men.” And Mr. Crooker wrote his address, with a little stub of a pencil, on a corner of the newspaper which had led to their acquaintance, tore it off carefully, and gave it to Bert.

“Well, Bert,” said the old man, “I’m glad to make your acquaintance, and I hope you’ll come and see me. You’ll find me in very humble quarters. Now won’t you let me pay for my dinner? I believe I have enough money. Let me see.” And he put his hand in his pocket.

Bert would not hear of such a thing; but walked up to the desk, and paid the whole bill.

When he looked around again, the little old man was gone.

“I’ll go and see him the first chance I have,” said Bert, as he looked at the penciled strip of newspaper margin again before putting it into his pocket.

On the following Monday, Bert went to call on his new friend in Devonshire Street. Having climbed the two flights, he found the door of the back room at the right ajar, and, looking in, saw Mr. Crooker at a desk, in the act of receiving a roll of money from a well-dressed visitor. Bert entered unnoticed, and waited till the money was counted and a receipt signed. Then, as the visitor departed, Mr. Crooker noticed the boy, offered him a chair, and then turned to place the money in the safe.

“So this is your place of business?” said Bert, glancing about the plain office room. “What do you do here?”

“For myself,” said the old gentleman, with a smile.

Bert was shocked! This was the man whom he had invited to dinner last Thursday!?

“I am a poor man,” said Mr. Crooker, locking his safe. “Money doesn’t make a man rich. I’ve enough money. I own houses in the city. They give me something to think about and keep me busy. I had truer riches once, but I lost them long ago.”

From the way the old man’s voice trembled and eyes glistened, Bert thought he must have meant by these riches, the friends he had lost, wife and children, perhaps.

“To think of me inviting you to dinner!”

“It was odd. But it may turn out to have been a lucky circumstance for both of us. I like you. I believe in you, and I’ve an offer to make you. I want a trusty, bright boy in this office, somebody I can bring up in my business, and leave it with, as I get too old to run it myself. What do you say?”

What could Bert say?

The lonely, childless old man, who owned so many houses, wanted a home and a family. One of his houses he offered to Bert’s mother, with ample support for herself and children if she would allow him to live with them like a grandfather.

Of course she accepted; and Bert soon saw all his dreams come true. He had employment, which promised to become a profitable business, as indeed it did in a few years. The old man and the boy proved very useful to each other; and, more than that, he was united once more with his mother and sisters in a happy home, where he has since had many Thanksgiving dinners.