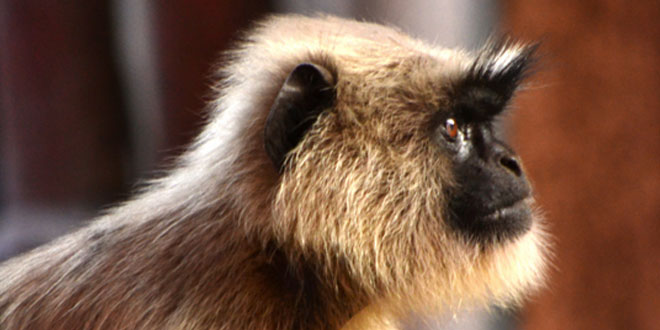 Langur, Hanuman: Mammal Encyclopedia For Students And Children — The gray langurs are a group of Old World monkeys and make up the entirety of the genus Semnopithecus. Colobinae is a subfamily of the Old World monkey family that includes 58 species in 10 genera, including the skunk-like black-and-white colobus, the large-nosed Proboscis Monkey, and the gray langurs, sacred to India.

Gray langurs are large and fairly terrestrial, inhabiting open wooded habitats and urban areas on the Indian subcontinent. Until recently they were considered one species, Semnopithecus entellus; now seven distinct species are recognized. When only one species was recognized, it was also called the Hanuman Langur (named after the Hindu vanara divinity Hanuman), the Common Langur and the Entellus Langur. In Sri Lanka, it is natively known as the Wandura.

They are largely gray, with a black face. In Indian mythology, this is because Hanuman, a monkey warrior, burnt his hands and face trying to rescue Lord Rama’s wife. Males are up to 75 cm long, and females 65 cm. Langurs from the southern part of their range are smaller than those from the north.

Gray langurs feed on leaves, fruit, buds and flowers. Their diet, however, is highly seasonable, with mature leaves being eaten only as a fall-back food during the winter months. In the summer, especially before the monsoon season, they are highly frugivorous. They also supplement their diet with insects (up to 25% in some months), tree bark and gum.

Though they sleep in trees, they spend more time on the ground than any other known colobine species. They are diurnal and usually walk on all fours.

They live in medium to large groups, usually with one dominant male. Males do not hold the dominant position for long in a group, with the average being about 18 months. Adolescent males who are expelled from the group sometimes form ‘bachelor’ packs. These packs, after a time, start to harass the group that expelled them, and challenge the alpha for leadership of the pack. If an attack by a bachelor pack is successful and they are able to kill the alpha, they will engage in a power struggle, where first all of the infants fathered by the previous alpha are killed, and then the bachelors fight among themselves, killing each other until only one remains, who then becomes the leader of the pack.

An interesting relationship has been observed between herds of Chital deer and troops of the Norther Plains Grey Langur (Presbytis entellus), a widespread leaf-eating monkey of South Asia. Chital apparently benefit from the langurs’ good eyesight and ability to post a lookout in a treetop, helping to raise the alarm when a predator approaches. For the langurs’ part, the Chital’s superior sense of smell would seem to assist in early predator warning, and it is common to see langurs foraging on the ground in the presence of Chital. The Chital also benefit from fruits dropped by the langurs from trees such as Terminalia bellerica. Alarm calls of either species can be indicative of the presence of a predator such as the Bengal Tiger.