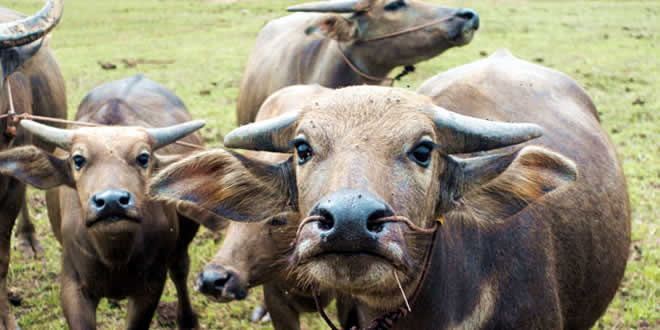 Buffalo: Cattle – Mammal Encyclopedia — The domestic buffalo or domestic Asian water buffalo cattle is abundant in Asia, and South America. It is a large ungulate and a member of the bovine subfamily. There are established feral populations in northern Australia, and wild populations in much of Southeast Asia. All its domestic varieties and breeds descend from one common ancestor, the wild Asian water buffalo, which is now an endangered species.

Buffalo Cattle, apart from their use as draft and dairy animals, are also used to pull bullock carts in the developing world. Their dung is used as a fertilizer and as a fuel when dried. In Chonburi, Thailand, and in South Malabar Region in Kerala, India, there are annual water buffalo races. A few have also found use as pack animals carrying loads even for special forces.

American bison are often called buffalo; however, this is technically incorrect as they are not true buffalo. The bison group comprises the American bison and the European bison or wisent. They are a related group of wild bovines, more closely related to cattle, gaur, banteng, and yaks. The buffalo genus includes water buffalo, tamarau and anoas in Asia, but not the African buffalo (or Cape buffalo) in Africa.

The slightly smaller African buffalo is not closely related to the water buffalo, and its ancestry remains unclear. Owing to the African buffalo’s unpredictable nature, which makes it highly dangerous to humans, it has not been domesticated, unlike its Asian counterpart. The domestic Asian water buffalo is the product of thousands of years of selective breeding carried out by ancient civilizations, particularly in the Indian subcontinent.

The African Buffalo or Cape Buffalo (Syncerus caffer) is a bovid from the family of the Bovidae. It is up to 1.7 meters high, 3.4 meters long. Savannah type buffaloes weigh 500-900 kg, with only males, normally larger than females, reaching the upper weight range. Forest type buffaloes are only half that size.The African Buffalo is not closely related to the slightly larger Wild Asian Water Buffalo, but its ancestry remains unclear. Owing to its unpredictable nature which makes it highly dangerous to humans, it has not been domesticated, unlike its Asian counterpart, the Domestic Asian Water Buffalo.