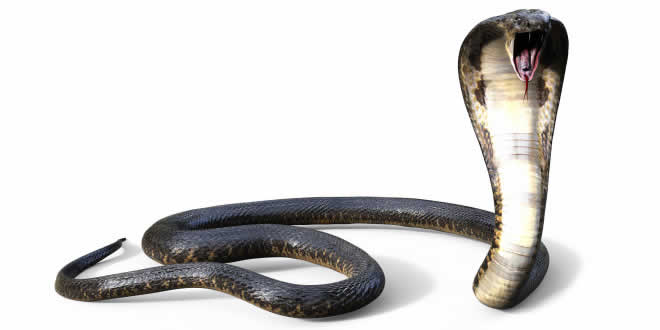 The most common cobra is the Egyptian cobra or Spectacled cobra Naja naja, native to the Indian subcontinent and associated with snake charming there. The Black cobra, found in Pakistan and North India, is generally considered to be a sub-species.

The second most common cobra species is the Monocled cobra, Naja kaouthia, widespread in Asia.

In addition to a deadly bite, the Spitting cobra can incapacitate larger would-be predators by spraying venom into their eyes. This is extremely painful and can cause permanent blindness, but if washed out promptly rarely causes permanent damage.

The King cobra is ophiophagous; it feeds almost entirely on other snakes, even venomous ones, although it sometimes preys on small rodents and birds. It will only attack humans if provoked or in other extreme circumstances that threaten its survival. If not treated, a king cobra’s bite can kill a person in just half an hour. King Cobras may reach up to 5.2m (17.1ft) in length, making them the largest venomous snakes in the world.