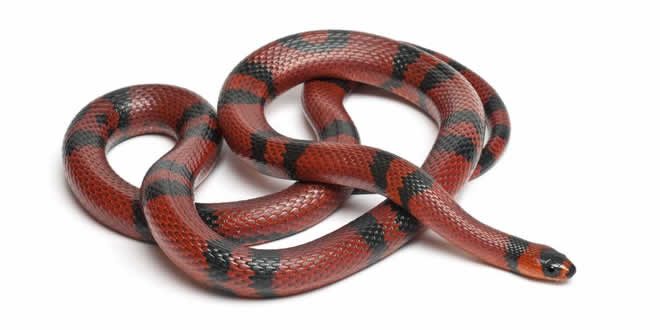 Milk Snake — This is a species of king snake. There are around 25 subspecies among the milk snakes, including the scarlet kingsnake (Lampropeltis triangulum elapsoides). The subspecies have strikingly different appearance, and many of them have their own common names. They are found from Canada to Ecuador,and will grow 24 to 36 inches long.

Some milksnakes have a striking resemblance to coral snakes and this mimicry (known as Batesian mimicry) likely scares away potential predators. While both milk snakes and coral snakes possess transverse bands of red, black and yellow, a common mnemonic can be used to properly distinguish between the deadly coral snake and the harmless milk snake.

Milksnakes are much more opportunistic eaters than the fox snake or corn snake. They have been known to consume a variety of animals including rodents, eggs, birds, reptiles, amphibians, and invertebrates. Nevertheless the diet of an adult milk snake still primarily consists of rodents. They are nocturnal eaters and are often found during the day in old barns and under wood.

The milksnake mates from early May to late June. The female lays three to twenty-four eggs beneath rotting wood, boards, rocks and rotting vegetation.

Like other members of the king snake family, the milk snakes sometimes eat other snakes, and do have at least some immunity to their venom.

A common myth about the milksnake is that they suck cow udders to get the milk. The myth is entirely false. The milksnake does not have the physical capabilities to suck milk out of a cow. Milk snakes are, however, frequently found in and around barns, making use of their cool and dark environments, and for the easily accessed populations of rodents to feed on. This proximity to barns, and therefore cows, gave rise to the myth.

Previous World Milk Day: Info, Date, History, Theme
Next How Much Milk For A One-Year-Old?