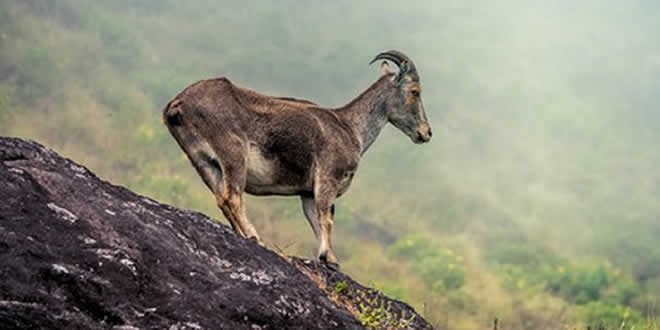 Tahr Mammal — Tahrs are three species of large ungulates closely related to the wild goat. The Himalayan Tahr is one of three species of tahr. The others are the Arabian Tahr of Oman and the Nilgiri Tahr of southern India.

Up until recently the three species were believed to be closely related to each other and were placed in one genus, Hemitragus. Molecular genetic studies have proved that the tahrs are not genetically related as thought earlier. Now they are considered as three separate genera; Hemitragus (Himalayan Tahr), Nilgiritragus (Nilgiri Tahr) and Arabitragus (Arabian Tahr)

The Himalayan Tahr Hermitragus jemlahicus is found in the Southern Alps of New Zealand where it is hunted recreationally. *Tahr in New Zealand A small population was also released on Table Mountain in South Africa until they were exterminated as a ‘pest’ animal by authorities.

The Himalayan tahr (Hemitragus jemlahicus) is a large even-toed ungulate native to the Himalayas in southern Tibet, northern India and Nepal. It is listed as Near Threatened on the IUCN Red List, as the population is declining due to hunting and habitat loss.

A recent phylogenetic analysis indicates that the genus Hemitragus is monospecific, and that the Himalayan Tahr Mammal is a wild goat.

The Himalayan Tahr Mammal has been introduced to Argentina, New Zealand, South Africa and the United States.

The word “tahr” is derived from the Nepali word thār and was first used in English writings in 1835.

The genus name Hemitragus is derived from the Greek words hēmi- meaning “half” and trágos meaning “goat”.