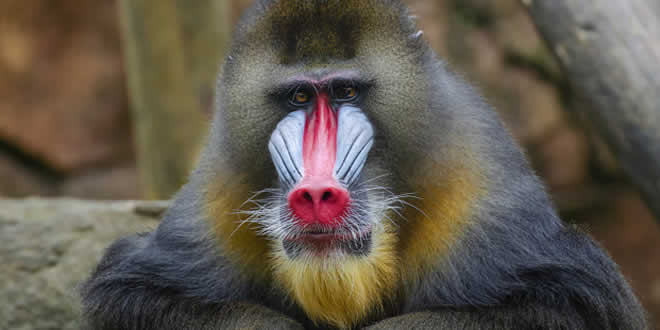 Drill — The Drill (Mandrillus leucophaeus) is a primate of the Cercopithecidae (Old-world Monkeys) family, closely related to the baboons and even more closely to the Mandrill.

The Drill is similar in appearance to the Mandrill, but lacks the colorful face. It is found only in Cameroon, Nigeria, north of the Sanaga River and on the coastal island of Bioko, part of Equatorial Guinea.

The Drill Monkeys are one of Africa‘s most endangered primates.

The Mainland Drill Monkeys (Mandrillus leucophaeus leucophaeus) is a subspecies of the endangered Drill. It is distinguished by ringed yellow and black coloring on its crown, and is otherwise similar to the Bioko Drill.

The Bioko Drill (Mandrillus leucophaeus poensis) is a subspecies of the endangered Drill. It is distinguished by a brownish yellow crown with a black tip. It is otherwise like the Mainland Drill.

The drill (Mandrillus leucophaeus) is a primate of the family Cercopithecidae (Old World monkeys), related to baboons and even more closely to mandrills.

The drill is a short-tailed monkey up to 70 cm (28 in) long, similar in appearance to the mandrill, but lacks the bright blue and red on the face of that species. It has high sexual dimorphism in weight, with males weighing up to 50 kg (110 lb) and females up to 12.5 kg (28 lb).

The body is overall a dark grey-brown. Mature males have a pink lower lip and white chin on a dark grey to black face with raised grooves on the nose. The rump is pink, mauve and blue. Female drills lack the pink chin.

A dominant male leads a multi-male multi-female group of 20-30 individuals, and is father to most of the young. This group may join others, forming super groups of over 100 individuals. They are seasonally semi-nomadic, and will often rub their chests onto trees to mark their territory. They are semi-terrestrial, foraging mainly on the ground, but climbing trees to sleep at night. The females give birth to a single baby; twins have been recorded once at the Drill Rehab & Breeding Center in Nigeria.

Average longevity in captivity is 28 years.

The diet is primarily frugivorous, taking a wide range of fruit, but they also eat herbs, roots, eggs, insects, and small mammals on occasion.