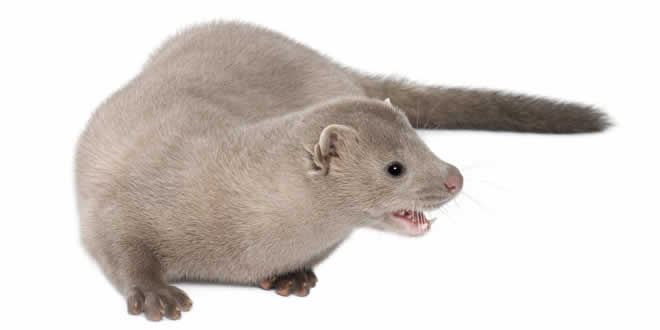 Mink: Carnivorous Mammal Encyclopedia — A mink mammal is any of several furry, dark-colored, semi-aquatic, carnivorous mammals of the family Mustelidae, which also includes the weasels and the otters. It is naturally found in North America, northern Europe, and most of Russia west of Ural Mountains. Mink fur has been highly prized for its use in clothing, with hunting giving way to large-scale mink farming. Its treatment has also been a focus of much animal welfare activism.

While mortality is extremely high in the early months of the life of the American Mink, animals that do survive the first year can live as long as three years in the wild. In captivity, mink can live 10–12 years and have on average 4–5 kits per litter once a year. The mink is found in places which suit its habits throughout almost all North America, from Florida to the Arctic. An endangered subspecies, the Everglades Mink (Mustela vison evergladensis), is endemic to the Florida Everglades.

American Mink of other subspecies have found their way into the wild in Europe (including Great Britain) and South America, after many were released from or escaped from mink farms which were no longer commercially viable. Trapping is used to control and eliminate any feral mink.