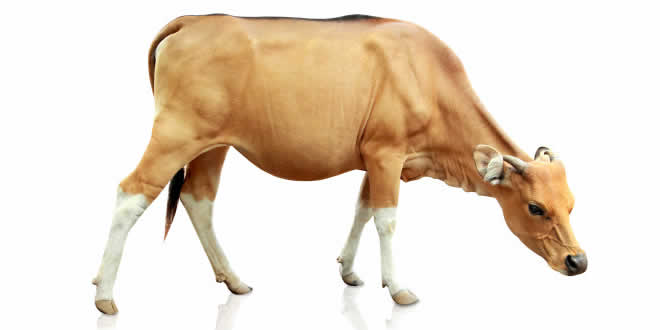 Banteng Cattle — also known as tembadau – The Banteng, Bos javanicus is an ox that is found in Burma, Thailand, Cambodia, Laos, Vietnam, Borneo, Java, and Bali. Some Banteng were introduced to Northern Australia during British colonization in 1849 where they are doing extremely well having grown in number spurred by the trophy hunting incentive.

Banteng live in sparse forest where they feed on grasses, bamboo, fruit, leaves and young branches. The Banteng is generally active both at night and day time but in places where humans are common they adopt a nocturnal schedule. Banteng tend to gather in herds of two to thirty members.

Banteng have been domesticated in several places in Southeast Asia, and there are around 1.5 million domestic Banteng. Domestic and wild Banteng can mate and offspring are often fertile.

The banteng, also known as tembadau, is a species of cattle found in Southeast Asia. The head-and-body length is between 1.9 and 3.68 m (6.2 and 12.1 ft). Wild banteng are typically larger and heavier than their domesticated counterparts, but are otherwise similar in appearance. The banteng shows extensive sexual dimorphism; adult bulls are generally dark brown to black, larger and more sturdily built than adult cows, which are thinner and usually pale brown or chestnut red. There is a big white patch on the rump. Horns are present on both sexes, and are typically 60 to 95 cm (24 to 37 in) long. Three subspecies are generally recognized.
Share