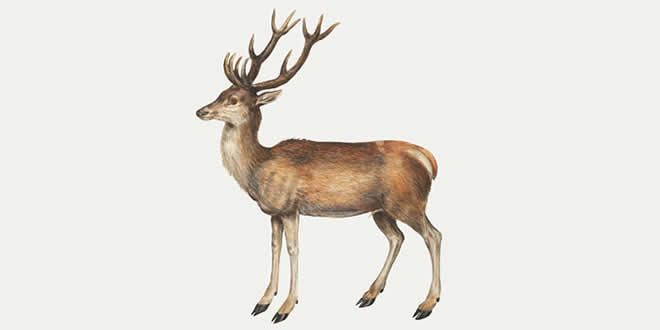 Deer Mammal Animal — A deer is a ruminant mammal belonging to the family Cervidae. A number of broadly similar animals from related families within the order Artiodactyla (even-toed ungulates) are often also called deer. Male deer grow and shed new antlers each year, as opposed to antelope, which are in the same order and bear a superficial resemblance to deer physically, but are permanently horned.

Deer mammal are widely distributed, and hunted, with indigenous representatives in all continents except Antarctica and Australia, though Africa has only one native species confined to the Atlas Mountains in the north-west of the continent, the Red Deer. (The Mouse Deer or Water Chevrotain of African forests is not a true deer; all other animals in Africa resembling deer are antelope).

Deer mammal live in a variety of biomes ranging from tundra to the tropical rainforest. While often associated with forests, many deer are ecotone species that live in transitional areas between forests and thickets (for cover) and prairie and savanna (open space). The majority of large deer species inhabit temperate mixed deciduous forest, mountain mixed coniferous forest, tropical seasonal / dry forest, and savanna habitats around the world. Clearing open areas within forests to some extent may actually benefit deer populations by exposing the understory and allowing the types of grasses, weeds, and herbs to grow that deer like to eat. However, adequate forest or brush cover must still be provided for populations to grow and thrive.

Small species such as the brocket deer and pudus of Central and South America, and the muntjacs of Asia occupy dense forests and are less often seen in open spaces. There are also several species of deer that are highly specialized, and live almost exclusively in mountains, grasslands, swamps and “wet” savannas, or riparian corridors surrounded by deserts. Some deer have a circumpolar distribution in both North America and Eurasia. Examples include the reindeer (caribou) that live in Arctic tundra and taiga (boreal forests) and moose that inhabit taiga and adjacent areas.

The highest concentration of large deer species in temperate North America lies in the Canadian Rocky Mountain and Columbia Mountain Regions between Alberta and British Columbia where all five North American deer species (White-tailed Deer, Mule deer, Caribou, Elk, and Moose) can be found. This is a region that boasts mountain slopes with diverse types of coniferous and mixed forested areas along with lush alpine meadows. The foothills and river valleys between the mountain ranges provide a mosaic of cropland and deciduous parklands. The aspen parklands north of Calgary also have many lakes and marshes. Elk and Mule Deer are probably the most common animals throughout the region. The caribou live at higher altitudes in the subalpine meadows and alpine tundra areas. The White-tailed Deer have recently expanded their range within the foothills and river valleys of the Canadian Rockies due to conversion of land to cropland and the clearing of coniferous forests allowing more deciduous vegetation to grow. They often share this riparian habitat with moose, but left the adjacent Great Plains and drier grassland habitats to Elk, American bison, and pronghorn antelope.

Deer mammal generally have lithe, compact bodies and long, powerful legs suited for rugged woodland terrain. Deer are also excellent swimmers. Deer are ruminants, or cud-chewers, and have a four-chambered stomach. The teeth of deer are adapted to feeding on vegetation, and like other ruminants, they lack upper incisors, instead having a tough pad at the front of their upper jaw. The Chinese water deer and Tufted deer have enlarged upper canine teeth forming sharp tusks, while other species often lack upper canines altogether. The cheek teeth of deer have crescent ridges of enamel, which enable them to grind a wide variety of vegetation.