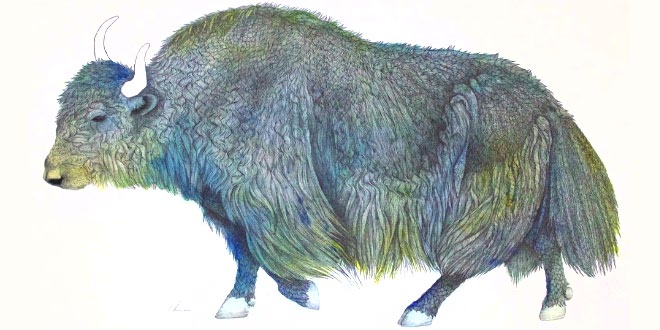 Yak — The yak (Bos grunniens, but also Poephagus grunniens, though this new name is not universally accepted) is a long-haired bovine found throughout the Himalayan region of south Central Asia, the Qinghai-Tibetan Plateau and as far north as Mongolia. In addition to a large domestic population, there is a small, vulnerable wild yak population. In Tibetan, the word yak refers only to the male of the species; a female is a dri or nak. In most languages which borrowed the word, including English, yak is usually used for both sexes.

Yaks are herd animals. Wild yaks stand about two meters tall at the shoulder and domesticated yaks about one meter. Both types have long shaggy hair to insulate them from the cold. Wild yaks can be brown or black. Domesticated ones can also be white. Both males and females have horns.

Wild yaks (Tibetan: drong) can weigh up to 1,200 kg (2,400 lb). They usually form groups of between 10 and 30 animals. Their habitat is treeless uplands like hills, mountains and plateaus between 3,200 m (10,500 ft) and roughly 5,400 m (18,000 ft). They eat grasses, lichens and other plants. They are insulated by dense, close, matted under-hair as well as their shaggy outer hair. Yaks secrete a special sticky substance in their sweat which helps keep their under-hair matted and acts as extra insulation. This secretion is used in traditional Nepalese medicine. Many wild yaks are killed for food by the Tibetans; they are now a vulnerable species.

Domesticated yaks are kept primarily for their milk, fiber, and meat, and as beasts of burden. They transport goods across mountain passes for local farmers and traders as well as in support of climbing and trekking expeditions; their dung is even burned as fuel. Yak milk is often processed to a cheese called chhurpi in Tibetan and Nepali languages, and byaslag in Mongolia. Often the pack animals are actually crossbreeds of the yak and Bos taurus (common domestic cattle). These are known in Tibetan as dzo or dzopkyo. Yaks grunt, and unlike cattle are not known to produce the characteristic bovine lowing sound.