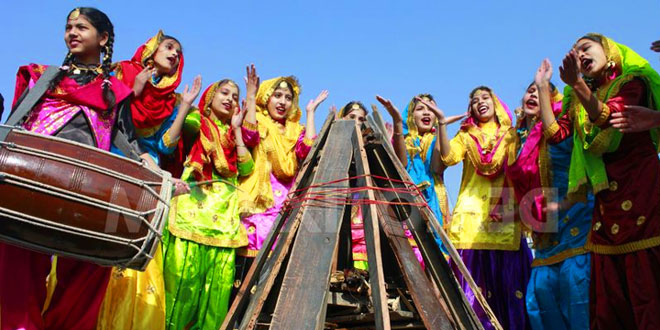 Bonfires and Bonhomie: Creating an aura of warmth to ward off the winter chill, there are a host of harvest festivals lined up for mid-January. So while it’s Lohri in North India, it’s Uttarayan in Gujarat, Pongal and Tamil New Year in the South, Magha or Bhugali Bihu in Assam, and Makar Sankranti in the rest of the country to add to the mirth and the merriment.

And when the mood is festive, can feasting be far behind. A dry fruits retailer says, “We have attractively packaged the traditional savories like gajjak and til laddoos in colorful baskets with satin ribbons for Lohri. In homes where there has been a wedding or childbirth, sweets are given to relatives and loved ones. We are selling sweets in attractive containers that can be used later.”

Lohri gifts are exchanged with great enthusiasm and more so if there has been a birth or marriage in the family. If it is a newborn’s first Lohri, the maternal grandparents send gifts of clothes, sweets, rewari, peanuts, popcorns and fruits for the child. A new bride also receives gifts of clothes, jewellery and sweets from her parents as well as her in-laws.

Upasana Sood is getting ready for the festivities after the recent wedding of her son. Says she, “This Lohri is going to be special for us as it is my daughter-in-law’s first celebration after marriage. We will have a bonfire in the evening outside our house and make a prasad comprising til, gajjak, gur, moongphalli (peanuts) and phuliya (popcorn). There will be a ritual of pouring milk and water around the bonfire to thank Agni (Sun God) and seek his blessings. Then we will perform the gidda and wind up the celebrations with a hearty Lohri dinner of sarson ka saag and makki ki roti.”

Traditionally, on Lohri, gifts of sweets or money are exchanged. But with rampant urbanization, the nature of gifts has undergone a sea change. Nowadays, gifts are also given “online”. Says Priyanka, who gave birth to a bonny baby girl on December 24, “My parents live in the US and it is not possible for them to be physically present for the Lohri celebrations. Hence they booked the presents online.”

While people like Kamini like to celebrate it the traditional way, the younger generation seems to have given a consumerist twist to the festival. Instead of chorusing the traditional Sunder Mundriyen songs, they prefer taking the DJ route, belting out the latest chartbusters. Says Ishan, who will be celebrating the festival with his friends, “We will groove to Munni Badnaam and Shiela Ki Jawani.”

Bonfires and Bonhomie: Prayers and fasting

Lohri in North India corresponds to Pongal in South India. The word Pongal has been derived from the word ‘Ponga’ which means ‘boil’ or ‘overflow’. The word also refers to a delicacy prepared by the people of Tamil Nadu on Pongal day. Pongal, which starts on January 13 or 14, continues for up to three or four days.

In East and Central India, people take a holy dip in the river on Makar Sankranti (January 14).

Explaining the significance of Makar Sankranti for Hindus, Uttra Prasad says, “On Makar Sankranti, the first day of the Magh month, when the sun changes its course, we give away alms in the form of rice and dal. In Bihar, people eat dahi-chuda as it is considered auspicious.”